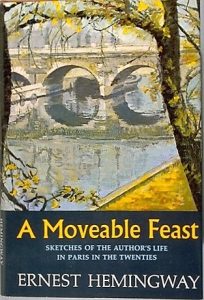 A Moveable Feast, which was completed in 1960, tells of the time Ernest Hemingway lived in Paris with his first wife, Hadley, between 1921 and 1926. His memories of that period are captured in 20 short essays: each stands alone, and there is no overall storyline or theme, beyond that of the city itself, but this slender book conjures an image of Paris that is almost tangible. The smells, tastes, sights and sounds of Paris spring off the pages, and the people breathe again as they laugh and love and quarrel and drink and smoke and work and dream. All human life is here: raffish Bohemian artists, Avante Garde writers and poets, drunks, bartenders, fishermen, street cleaners, booksellers, waiters…

There are glimpses of those who later became well known, alongside others who were already famous. There is Alice B. Toklas; Gertrude Stein looking, says Hemingway, like a peasant woman rather than the Roman emperor she later resembled; James Joyce, who drank sherry, not wine; and kindly Sylvia Beach from Shakespeare and Company, who ran a lending library for ex-pats, and provided a refuge when they needed it. Hemingway recounts his friendship with Scott and Zelda Fitzgerald, locked into their mutually destructive relationship – and paints a distinctly unsympathetic portrait of Zelda, who in reality was something of a victim. He is far kinder in his portrayal of Ezra Pound.

And you see the young author learning his craft as a writer, trying to form one true sentence that will carry his story forward. Sometimes words pour out of him, at others he struggles to find the language that expresses his thoughts. All you have to do is write one true sentence. Write the truest sentence that you know. He spends a lot of time hungry because he and Hadley have very little cash, but he believes lack of food sharpens his perceptions (I have to say I found this rather disturbing). And when he does have money he seems to spend it on food and drink for himself, with never a thought for Hadley and their baby son.

The book provided source material for Paula McLain, who gave a voice to Hadley in her excellent novel, The Paris Wife, (thanks to Marie Tracey for lending it to me) where Hemingway is charming and charismatic, but a bit of a sod. A Moveable Feast does nothing to dispel that view. In many ways, it’s a magical time – but it ends with the appearance of another woman. Hemingway makes no excuses for what happens – although he seems to put the blame on that other woman, who became his second wife. But he is nostalgic for the past, and for Hadley. I wish had died before I ever loved anyone but her, he says. He finishes as he starts, with a tribute to the city.

There is never any ending to Paris and the memory of each person who has lived in it differs to that of any other. We always returned to it no matter who we were or how it was changed or with what difficulties, or ease, it could be reached. Paris was always worth it and you received a return for whatever you brought to it. But this was how Paris was in the early days when we were very poor and very happy.

Paris Café,  1944
after an incident in A Moveable Feast

Storm-drops rattled on the window. He,
still wearing his wet coat against the cold,
sat down, and ordered rum St James,
took out his pencil and began anew
his search
to write one sentence
that he knew was true.

Behind the bar an ancient parrot perched,
a Grey from Africa, and no one else
in all the place, except one girl who sat,
her back to him.
Her crow-black hair cut her white neck
(she had no coat). Her dress
was faded, but her very best.

His loins stirred
The parrot winked one eye
It stretched its neck, it squawked
“Méchante, méchante!”
She did not turn, ignored the bird.
He smiled, looked down, and wrote
“The parrot did not know the word it spoke.”

He wrote a story of the parrot and the girl;
He did not hear the bell
above the door
ring twice.
When he
looked up again, the rain was gone.
And so was she.

One thought on “A Movable Feast”