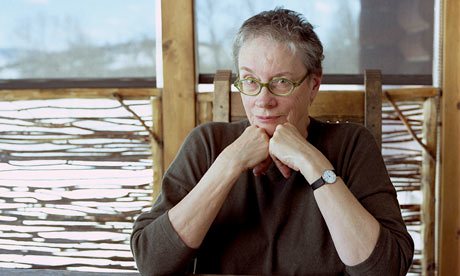 The inaugural Iron Mountain Literature Festival, based in Carrick-on-Shannon, was held on Friday evening October 7th and Saturday 8th, 2016, replacing the John McGahern Seminar which had run for eight years (2007 – 2014). The programme was loosely themed around ideas such as the language of landscape, place and memory in writings. An archaeologist, geographer and architect were part of the talks and discussions.

As the Programme explained:

The Iron Mountain Literature Festival… draws much of its motivation from the works of and legacy of John McGahern, an approach which has allowed us to curate a wide-ranging literary event combining panels, talks, readings and field trips which look to ideas central to and arising from an exploration of place, home and identity.”
In what many felt was the highlight, novelist Annie Proulx, along with architect Dominic Stevens, took part in a discussion that touched on nature and the natural environment and the role of the architect/builder in the modern context.

Annie Proulx won the Pulitzer Prize, a National Book Award and the Irish Times International Fiction Prize. She is now aged eighty-one. In her book Bird Cloud she describes how she chose a site in the ‘back of beyond’ in Wyoming to build her dream house. She bought a 640 acre estate, which (as older folk should know) is one mile square. In the book she describes the ups and downs of the build, mixed with her own genealogy and the history of the Native Americans in that part of Wyoming, the depredations of the White Settlers in the 18th and 19th centuries, as well as much about the archaeology and wildlife of the region. The book is a great read – the building of the house extremely well recorded and the history of the Native Americans, White hunters, and the wildlife so well researched. She writes beautifully.

Proulx oversaw the building of the house when she was seventy years old. It broke her financially, but for the next ten years it was a retreat for her writing as well as an amazing place to live. But it was too far from everywhere as she grew old – two and a half hours from the nearest good supermarket and four hours from an airport. Having to sell it last year nearly broke her heart: the buyer was a billionaire only interested in the land.

During the discussion she had high praise for Dermot Healy as a writer. She also advised everyone to keep out fracking and not let it destroy a pristine landscape like Leitrim, as it was doing in America.

Look out for the next Iron Mountain Literature Festival, at the beginning of October, before you hibernate.

Image from the Guardian review of Bird Cloud 20 February 2011