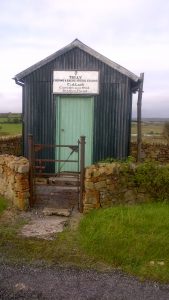 I remember the Border when it was a Border
before the Common Market as we called it then
when everyone had tales about the old times
smuggling the everyday – butter, sugar –
shopping bags hung on the outside handles of train carriages.
Jokes about wetting the tay.

We were the Protestants who crossed the border
each July to avoid the bands
heading for the sea in Donegal or all the way
to Cork, my uncle’s farm.

The green triangle on my mother’s Morris Minor
showed that we would return.
We hoped the weather would be fine,
the Customs men at Pettigo be sitting in the sun
and wave us through, for Pettigo
was easy that way, as we knew
not like Belleek.

And then
we’d keep an eye for green An Post vans
or signs that said Go Mall to show
that this was not our land
though otherwise, it was the same
round humping hills and winding lanes
and sudden loughs.

And I recall the Border when it was a Border
once again, with concrete blocks
and corrugated towers
and helicopters hung like moths –
beating the sky
above the humping hills and winding lanes
and sudden loughs.

The Customs sheds were gone, but borders now
closed round us tight
with kerb-side colours, tattered flags
X marks the spot
and, Don’t go out tonight.
You don’t know who might be about
and don’t trust anyone who says
Brits Out does not mean you.

Yet, even in the worst of times
when no one drove
round humping hills, the lanes still wound
past sudden loughs
to stop in block or crater or in broken bridge.
If you knew where to look, you still might find
some place to pass a bike, some tractor track
to bind it back.

It’s not a Border if there’s no way through.

One thought on “Borderlines”