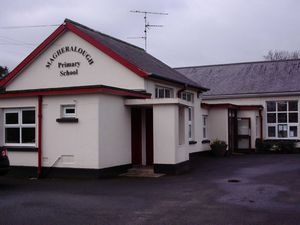 So – here we are tonight on the longest day of the year, closing the doors of Magheralough Primary school.

There must have been a strong community and a particularly strong educational tradition in the area which enabled Reverend Irvine to build a school just behind that that laurel hedge, fill it with pupils and staff it with local teachers. He was ahead of his time and would have seen the school as an experiment in learning.
Through the centuries that educational tradition has stayed vibrant. As Principal of this community, I have been privileged to have had the opportunity to undertake my own learning experiment. One where educational love, the love of learning, the treating of children as partners in their teaching has shown me that bigger is not always necessarily better. There is the widely held belief that larger teaching units are more effective but my experience here, what I have heard from parents and children, and particularly the quality of work I have witnessed the children produce day in and day out here in Magheralough suggests we have the evidence to challenge the untested rush towards rationalisation.

This school has produced past pupils such as Patrick Kelly who has a statue built in his memory in Bombay in India, and Hugh Hetherington who died in the First World War in battle in 1917 and is buried at Vimy Ridge. Past pupils from here have made their mark in countries all over the world and many others who have stayed in Ireland have made valuable contributions to the fabric of society here.

Yet here we are tonight on the longest day of the year, closing the doors of Magheralough Primary school.

There is always damage to lives when financial and administrative rationalisation becomes more important than the people it is going to affect. Magheralough is a unique community whose future has been decided by people and institutions who have no relation to this place or an understanding of the vital role which a learning community plays in the well-being of society, who have no idea how this community unites people from different religions and beliefs. Have no idea, even though the education inspectorate told them so, of the quality of education and experience being offered to children who attended over the last three years. The chance to further and deepen these understandings has been lost.

Because here we are tonight on the longest day of the year, closing the doors of Magheralough Primary school

But all should not be lost. Before the Father Matt Hall was built this school was the centre for dances, evening classes – it was a centre for a community coming together.

My sad duty as a Principal is to turn the keys for the last time on Magheralough School. However, my fervent hope is that all of you here tonight will restore the loss done to this community by turning this idyllic place into a centre for community learning of an informal kind, of the kind envisaged by Father Matt all those years ago.

So – here we are tonight on the longest day of the year, closing the doors of Magheralough Primary school.

There are many I need to thank. I will not name them. They know who they are. Suffice to say there is not a key anywhere in the universe strong enough to close the doors of our hearts to the time we have had here. We walk away from the locked doors of Magheralough sad, perhaps even heartbroken – but immensely proud.

One thought on “Magheralough Primary School”

Leave a Reply to Katharine May Cancel reply