J.G. Ballard’s 1975 cult novel High-Rise is perhaps better appreciated as a metaphor for an inexplicable breakdown of social order. Long considered impossible to film, this brilliant adaptation by Ben Wheatley and Amy Jump reproduces the book’s incisive look at the social mores of the day while managing to recreate Ballard’s nightmare vision of a future world. This was speculative fiction very much of the time in which it was written; not sci-fi in the sense of space ships and imaginary planets, but a vision of our world where it takes little to tilt society into violence and chaos.

Tom Hiddleston (The Night Manager) plays Dr Robert Laing, the wealthy new resident of a futuristic apartment block designed to approximate a community. Occupying an apartment on the luxurious upper floor of the building, he quickly becomes aware of the tensions within this community. While those living on the upper floors enjoy all the services the building has to offer, the poorer families living in the cheaper flats below have to cope with the continual breakdown of services in the apartment block. Complaints are airily dismissed as ‘teething problems’ by the building’s architect, played by a laconic Jeremy Irons, residing in the Penthouse complete with roof garden from which he and his wife survey the world they have created.

Set in the 1970s, Wheatley and Jump refer to Margaret Thatcher in their film – but viewers may be reminded of others. The building itself, a beacon of modernism, lies at the heart of the film. It is both a prison and an escape, depending on the residents’ social and financial status. As power cuts and services fail the residents on the lower floors rage against the perceived privileges of those occupying the upper floors. Soon the regimented social strata of the building begin to break down. Decadence, despair and violence are all around as this mini-society goes into meltdown. Once it emerges that service charges are the same throughout the building it is not long before class conflict in the tower is rife. With scenes of mini-riots in the high-rise grocery market and the building’s previously pristine façade defaced, we are offered a nightmare–scape worthy of Ballard’s novel.

‘High-Rise’ has been described as the social-surrealist film of the year:

‘A savage and brilliant satire of the 1960s social idealism and the Thacherite values that undermined it.’ BFI review.

Cert 15, but not for the faint-hearted.

Chris Campbell retired to her native Enniskillen after working and living in Belfast and Belgium for many years. The Brussels Cinema Museum stoked her love of the art form and she is a member of the Fermanagh Film Club. 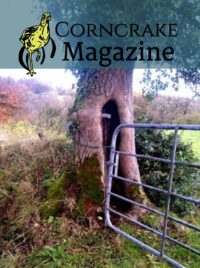