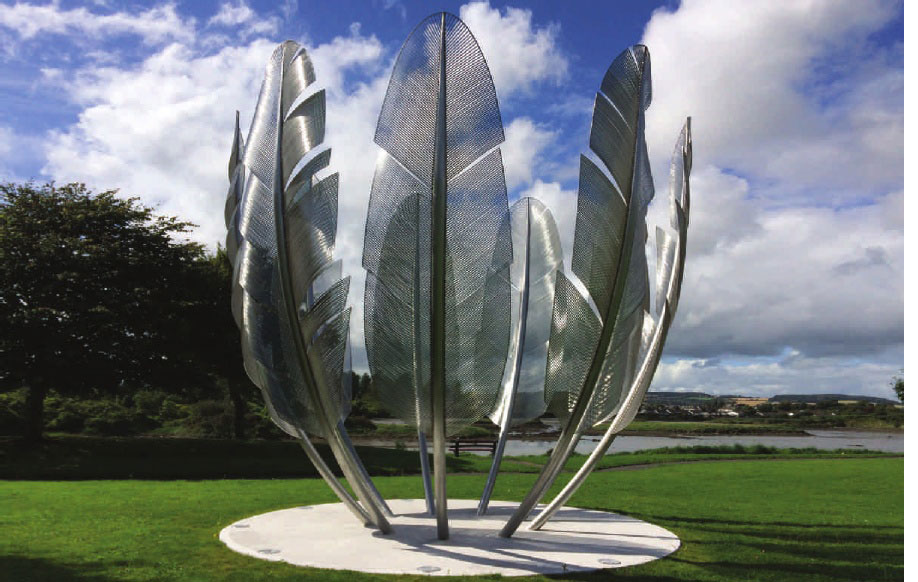 Drew University’s fifth Transatlantic Connections Conference was held in Bundoran from January 10–13 to celebrate the many ties between the United States and Ireland. The cover image features the Choctaw Nation memorial that commemorates how they, though suffering greatly themselves following the Trail of Tears that drove them from their own land, sent money to buy food during the Great Famine.

In that same dark time, according to family tradition, Paula Meehan’s family left Leitrim for Liverpool, only to remain stuck in the Monto district of Dublin for the next century. These are a few notes from her final keynote speech which was, she said; just an excuse for giving out poetry.

The speech was titled The Kindness of Strangers, and she began by saying how much she relied on that in her early wandering years.

The bad stuff you met, the negativity, the aggression – if you have a path as an artist, all that can be turned into power for the good… That’s the only truth I know.

She dedicated the reading to Alicia Suskin Ostriker, who was also present.

[Her book Stealing the Language] gave me a kind of an armour to survive the world that I was heading back to here in Ireland… I knew I would get the poems I needed here on this island, in my native city.

While she had been away, heroin had hit the city. In her latest book, Geomantic, Paula took her inspiration from the commemorative quilts that communities made for their children lost through addiction. Especially hard hit was her own community:

the descendants of O’Casey’s tenement dwellers … they knew story and they knew song. They gave it with such generosity.

There are 81 short poems designed as patches, each with nine lines of nine syllables each.

It interests me that the imagery in material that’s suitable for children is often ferocious and violent and terrifying… If we learn to feel fear in what should be a safe place, maybe then when we’re in the ‘real’ world and encounter fear, our bodies won’t close down in the face of it.

The Broken Bough
We held our breath when you were a boy,
Out on a limb of the old oak tree
Helpless below as you shimmied up
Into its shadowy canopy.
That day the bough broke and you hung there
Alone through the sudden thunderstorm
We came upon you after, unafraid
though drenched to the bone. The pattern set;
all those times since, we wasted our breath.

The American poet Gwendoline Brooks was the first person of colour to receive the Pulitzer Prize for Literature. Her book A Street in Bronzeville gave Paula:

models and clues as to how I could write about my own community without patronising them, without making excuses, without ‘on-behalf-ism‘ … How do you negotiate your own demons and your own road with the responsibility of singing to and for your community? …

This poem was inspired by a line of hers; the singers and workers that never handled the air.

The Ghost Song
From a dream of Summer, of absinthe
I woke to Winter. Carol singers
decked the halls of some long-lost homeland.
Late-night shoppers and drowsy workers
headed for the train. The night you died
was two-faced. June light never far from
mind though snow fell. I handled grief like
molten sunshine; learned to breathe your high
lithe, ghost song from thinnest air.

She was asked to write a suite of poems for the Museum of Tenement Life in Dublin.

I really do believe that Poetry is a sovereign state; it’s not History, it’s not Sociology, it’s a state onto itself. Unless we take those freedoms … we may be .. co-opted by various agendas and gangs… If poetry is to be always an exploration, so you don’t even know your own agenda till you’ve written it, it can lead to some strange arguments… I think I alarmed them slightly when I presented the finished piece, which is called Museum.

She discovered that the word originally meant a place to put things that please the Muses, so she wrote a sonnet for each of the Nine Muses. The house that is the Tenement Museum was built for Lord and Lady Molesworth. It was one of the earliest and grandest Georgian houses on the North Side. It went from being a family mansion of the ruling class to being a family to a room. The classical Georgian iconography was still there, but its meaning didn’t become apparent until she studied poetry.

In the tenement where she grew up the front door was always left open so homeless people could come in, to sleep under the stair or in any nook and cranny they could get into. There were ex-soldiers of the Great War, and the displaced women of Monto, the old red-light district. She remembers being sent out with a cup of tea for them in the morning.

To Polyhymnia, the Muse of Sacred Poetry

Our Lady of the Apocalypse

Our Lady of the Apocalypse, who never closed your heart
to the dissolute; pray for us, who gave shelter
in broken-down Georgian tenements
Who kept the doors open to the demented ones,
those who came in rags and miasmas of foul odour,
in delirium tremens, the worn-out old spunkers,
the displaced relics of Imperial trauma.
Oh, sweet daughters of Memory, veiled in Enigma,
who brought longed-for oblivion to the meths-drinkers,
the dipsos, the alcos, the put-down no-hopers,
those who came in from Chaos, from cold, from winds,
from rains, to sleep it all off in hallways and stairwells.
Who rent the long night with sobs, who cried out to you
in the throes of their last agony.