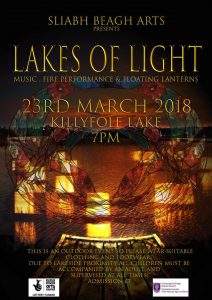 On the 23rd of March the Sliabh Beagh Artists once again created a magical evening of quality rural arts for everyone to enjoy.

The Lakes of Light event was a tremendous success with over 350 people in attendance. As darkness approached people gathered at Killyfole Lake and were greeted by the stunning harmonies of Tully.

The beautifully illustrated storytelling cranky (hand-cranked scroll) depicting the poem, Wandering Aengus by W.B Yeats followed, capturing the imagination of the audience as it moved in time with an original piece of music specially composed for the night.

A high energy fire performance from Those Fire Guys was a real hit with the younger members of the audience as they gathered in awe to watch. People then walked around the lake with their lanterns lit in procession.

As they passed by the mesmerizing lantern installation of weird and wonderful fish they approached the launch site and it was here the lanterns were released. Over 200 lotus flower lanterns were set afloat the lake which created a stunning spectacle, celebrating the coming of spring.

The support from the local community was outstanding throughout, with particular thanks to the local Primary Schools. Without the dedication of our volunteers the project would not have been such a success. The event and preparatory workshops were funded by the Arts Council of N.Ireland and Fermanagh and Omagh District Council.