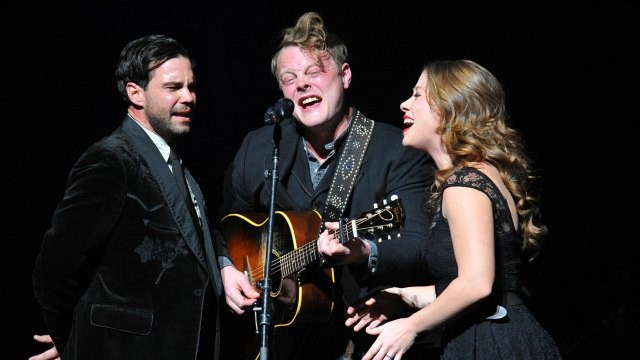 So what makes a good cover-version? What does it take for an artist to cover another artist’s song and make it their own? A distinctive and identifiable vocal instrument is a key component, but not necessarily a guarantor of general critical acclaim. In the Nilsson version of Without You, his voice took the song to another level, whereas the Mariah Carey version had some commercial success but drew a large raspberry from the critics. Jeff Buckley took John Cale’s version of Leonard Cohen’s Hallelujah and pretty much took ownership of that great anthem; although honourable mentions are due to k. d. laing, Rufus Wainwright, Jon Bon Jovi and Alexandra Burke for their versions. Anohni – when she sang under her former identity Antony, produced a blistering version of If It Be Your Will at a Cohen tribute concert in Australia in the noughties.

Bob Dylan has an enviable back catalogue of brilliant material, which have been covered by the likes of his one-time muse, Joan Baez, to Jimi Hendrix, Bryan Ferry and even contemporary artists like Adele amongst many, many others, such is the high esteem his songwriting is held.

Discussing the relative merits of each version with your friends is a good way to start a row -everybody will have their own thoughts. The covering artist has to walk a fine line between honouring the original, paying respect to the artist concerned, yet bringing something new to the song – a unique interpretation that may cast a different light on it. A ‘straight’ cover that is a barely indistinguishable version of the original song adds nothing to our understanding and enjoyment.

Janice Joplin brought her individual style to many well-known songs, creating imaginative and distinctive versions that have withstood the test of time. it is hard to believe at times that the songs were not actually written for her. Her version of George Gershwin’s Summertime is a world away from the composer’s original idea, yet it is not inconsistent with the tenor of the lyrics; similarly, her version of the classic Little Girl Blue is now so synonymous with her that a filmed biography was produced in recent times with that same title. Nina Simone also covered the song and produced a distinctive version; but it is her version of the Jacques Brel’s Ne Me Quitte Pas that simply devastates the listener with its brutal bitterness, far from the composer’s own droll narrative.

A change of gender can also bring to light nuances that the original artists were probably never even aware of. Some artists choose to change the pronouns to reflect the change in voice, as Sinead did with the Prince song; but many people would argue that the original lyric should be left untouched, changing the gender pronoun is somehow ‘sacrilegious’. Other people say to leave it unchanged creates a ‘trip’, as it takes the listener out of the song. What to make of the White Stripes covering Dolly Parton’s Jolene? There is no amount of lyrical amendment that is going to alter what is unabashedly a song with a distinctly feminine perspective, yet Jack White delivers such an incredibly passionate and soulful rendition that the gender becomes inconsequential. Similarly, another gender reversal can be found with the Scandinavian sisters First Aid Kit, who covered Black Sabbath’s iconic War Pigs at a festival, a very masculine song, yet powerfully and effectively delivered by distinctly feminine voices.

Many rap artists and so-called ‘DJs’ have committed crimes against the musical palate by appropriating and sometimes openly stealing parts of well-known songs for their own pallid and execrable fare. However, Eminem, with his song Stan, took Dido’s Thank You and produced something memorable, using the latter’s melodious ballad as a musical counterpoint to his dark, emotive rap story. The Fugees made Killing Me Softly a whole new adventure, diverting musically from Roberta Flack’s emotive rendition. Leona Lewis took her musical life in her hands by covering Run by Snow Patrol (devotees of the band cordially suggested she should follow the command in the title) yet I for one find her gospel version to be powerful and moving. Recently there was a cover of Simon and Garfunkel’s The Sound of Silence by metal act Disturbed; it divided opinion but the composer Paul Simon, publicly gave it his approval

On BBC Radio’s The Live Lounge contemporary artists are invited to cover other artists’ work and there are often some odd and idiosyncratic choices, but London Grammar have made it their own, by producing interesting distinctive versions of songs of their contemporaries, in their own style. Hannah Reid’s incredible voice imbues an authenticity in the interpretation that can take the breath away in covers of Wrecking Ball by Miley Cyrus, Wicked Game by Chris Isaak and even Prince’s seminal Purple Rain.

The secret to a great cover version, I believe, is a genuinely respectful and compassionate connection made between the covering artist and the song; like when an emotional Gregory Porter also covered Purple Rain on Jools Holland’s Later… within days of the composer’s sudden, unexpected death. I was at a concert a few years ago with Americana band, The Lone Bellow, who came down off their stage and amidst us all in the audience, performed Paul Simon’s Slip Slidin’ Away acoustically. Kanene Doheny Pipkin’s soaring vocal was augmented by an informal and unrehearsed chorus of two-hundred well-oiled Dubliners and friends, who surprisingly under the circumstances, sang with unimaginable control, pitch and tunefulness. We all left with dampened cheeks and a warming glow in our hearts.