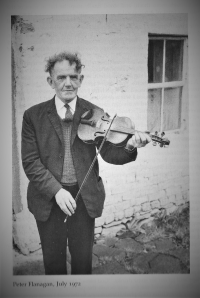 He pushed the empty dinner plate away
Knife and fork lay respectfully side by side
And picked up the child’s blue stocking-filler flute
Huge hands gripped where small hands fit
Fingers swollen fat as cows teats at evening milking
Ooze blood from countless thorn and briar lacerations
Each knuckle bent; etched deep with wrinkles as a thinker’s brow

Remembering each tiny muscle movement from which with each breath
Eighth and quarter notes rose in a flurry of sweet sound
Mingling with the aroma of boiled spuds and cabbage, fried bacon and egg

Children appeared from all directions and circled the music
Caught like moths in strong light
The baby, not walking, shuffled beneath the table in prime position
Between grass-cleaned wellingtons
Picks green to her mouth
My mother stands spellbound on the sandstone flag
Wide eyed, smiling, her hands frozen in the lifted apron
My father spooning semolina

The music stops, the baby cries, tiny hands rush to grab the disintegrating flageolet
P tips his mop of shaggy hair into his cloth cap and disappears out the door leaving
Imploding space in the melee
I follow awestruck behind
Until he is astride the sheugh*
As more music flies to the hills from bill-hook and slash-hook
Echoing in time with each stroke
I pull at the thorny bush and briar
Proud my hands are scratched and bleeding.

* from the Irish siothlaigh The open drain by the roadside or between fields. In Fermanagh the ditch is only the raised bank.

Peter (‘P’) Flanagan (1906-1992) lived as a landless labourer in Drumbargey townland near Bellanaleck. He began playing the flute at the age of eight, and later the fiddle and tin whistle, on which he developed his own complex rhythmic style, influenced by recordings of the great Sligo fiddle player, Michael Coleman.

He played for himself and his neighbours, but only after the farm work was done. If there weren’t spuds in the ridges, he would say, I couldn’t take down the flute or the fiddle. Until I know things is goin well, I don’t feel well atall. So I don’t. But when the spuds peep, I can take down the flute and play.

He developed his art as a member of Kinawley band in his younger days and, like his father before him, in the local troop of mummers. By the Sixties, the time when this poem was set, his style of music was out of favour, but he still continued whenever he had the opportunity. A measure of recognition came with the revival of the ’70s and the work of American anthropologist Henry Glassie. Cathal McConnell of the Boys of the Lough called P my first teacher.

In a lifetime of study, I have been blessed to know three completely realized artists. The first was Peter Flanagan, the others Ahmet Şahin the Turkish master of Islamic ceramics, and Haripada Pal the great Bangladeshi sculptor of Hindu images. While their works remain Peter Flanagan’s art has gone into the air, though I am comforted that my writings gained him some belated local recognition before he died. All three of these masters brought benefit through art to their communities. All were gifted, and all devoted themselves, working to their own exalted standards before the prime witness of God.