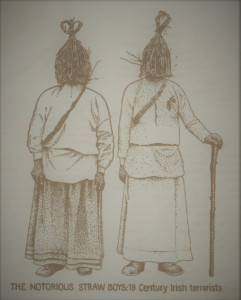 In 1977 I had recorded my father as he pulled out rhymes from his time as a mummer in Mulleek in the 1930s and 40s. As a child I had heard fragments of them from him in place of nursery rhymes.

Now, 19 years after his death, his voice brings back to life the crunch of heavy boots on rough lanes in the full December darkness of the Fermanagh countryside. He is one of a troupe of high-spirited young men roaming the back roads to bring an ancient drama into the kitchen of every house. Only his feet are cold; He is in a “lather of sweat” inside his heavy straw costume and he is glad to be able to take off his plaited straw headpiece between houses. Only some of his fellow mummers wear straw costumes, others wear long tunics and an “assortment of every rag they could get their hands on.” Disguise was essential.

They approach a house. The Captain raps sharply three times on the door. This signifies something out of the ordinary in a place where neighbours announce their arrival with the noise of the latch lifting.
The door opens, the light from candles or oil lamps spills out into the darkness.

“Any admittance in his house for the Captain and his mummers?” is the formal request.

Then, with permission given, the camouflaged men burst in, ducking under the low door of the thatched cottage. They form a semi-circle at one end of the kitchen, from which each in turn steps forward to deliver their rhymes. There is Room, The Captain, Jack Straw, Beelzebub, Wee Divil Doubt, The Wran, Turkish Champion and Prince George. A fight breaks out between Turkish Champion and Prince George. There is a fierce clashing of wooden swords and Prince George falls down dead. The Captain shouts for the Doctor. The Doctor has medicine!

The rue, the sue, the knuckles of a bumblebee,
The heart’s blood of a smoothing iron,
All boiled up together.
And mixed in a jenny wran’s bladder.

The Doctor brings Prince George back to life with this concoction. A melodeon is played. A mummer called Miss Funny, complete with handbag and dress, dances with the Captain. There is more music and ‘sport’, and money is collected for the mummers’ ball. Then, with a chorus of ‘the best of luck to yis all’, the fantastical troupe disappear again into the darkness.

On the tape when my father says the rhymes, his words run together as fast as his tongue can move. He stumbles over some of the rhymes, and he wonders aloud if there is “any man alive in Ireland today who knows all of the rhymes.” Back then in 1977, he saw mumming as something dead, something belonging to the past.

So did the American anthropologist Henry Glassie, who had recorded mummers’ rhymes in Ballymenone in south Fermanagh in 1972. In his scholarly, yet affectionate book, All Silver no Brass, written in 1975, he sees no place for Mummers in the modern Ireland where there is heat and light at the flick of a switch and nearly everyone has a car.

Of course at that time the Troubles had suspended mumming. When men of death prowled the roads it was no longer safe to invite masked men into your home in mid winter. Henry Glassie recognised the conflict between mumming and the troubles. He had seen beyond the mumming tradition as a response to the ancient concerns about the ebb and flow of light. He saw the play as demonstrating a community’s genuine potential for violence, then containing it, subduing it, and resolving its tensions in music and dance. The Troubles perverted this vision. Vincent Woods demonstrates this perversion in his heartbreaking play At the Black Pig’s Dyke. In it, sectarian assassins disguised as mummers go about their awful task of killing.

In spite of the Troubles and the trappings of modernity, the mumming tradition has proved resilient. In 1979, my father’s fellow Mulleek man, the renowned traditional singer Paddy Tunney, devoted a chapter in his book The Stone Fiddle to the mummers’ rhymes. My father’s fear that no-one remembered them all was unfounded. In the same year, the Creevy mummers from outside Ballyshannon were revived. They brought the ancient drama, not just to homes in the locality and to pubs and hotels over a wide area, but also to Irish Americans in New York and Boston. My father’s rhymes echoed all around me as I found myself in turn gathering an ‘assortment of rags’ to make a costume for my husband who had joined the Creevy mumming troupe.

If you are lucky enough to see the mummers, you will be linked back to a tradition which was first recorded in Ireland in the 17th century. It was in turn brought here from England, where it can be traced back to the 12th century, but its origins are still further back in the misty, pre-Christian era of sun worship.

While the rhymes and characters have changed over the centuries depending on time and place, the theme of death and rebirth has been constant. The mumming tradition itself has, like the play, experienced the ebb and flow of death and rebirth. The Creevy mummers ebbed in the 1980s, but between 1980 and 1995 a troupe of mummers became an annual school tradition in Ballyshannon Vocational school.

We may see ourselves as a modern, sophisticated people, but when we see the mummers, we connect again with life’s unchanging central mystery of death and new life. The stop button on the cassette player makes a loud clunk but my Father’s voice can still warm the room.

Room, Room, my gallant room, give me room to rhyme!

The image I chose (origin unknown), came from a book published in the early 1970’s. I do not know if either it or the caption is earlier. Jenny Brien

One thought on “Room, Room, Room for Mummers’ Rhymes”