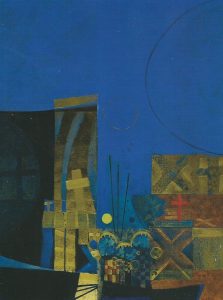 In an exciting first venture, the Royal Ulster Academy chose Enniskillen as one of the venues for their Outreach Programme. Part of the 137th Annual Members Exhibition travelled to the West to the Waterways Ireland gallery. This was quite a coup for Enniskillen, brought about in no small measure by the persistent lobbying by Noelle McAlinden, Arts Officer for the Western Education and Library Board.
The exhibition, in the attractive Waterways Gallery, proved a huge success with over 2,000 visitors in 30 days. Refreshingly, many of the visitors were local schoolchildren who would never otherwise have had the opportunity to view such a diverse display of artwork and sculpture. The range of artists and sculptures chosen to be brought to Enniskillen reflected the full range of the exhibition held at the Ulster Museum in Belfast. From oils to watercolours to bronzes this was in no way a diminished exhibition, rather a condensed one. The headquarters of Waterways Ireland generously hosted the event, providing a spacious venue with professional lighting.
Throughout the month there were talks, master-classes, demonstrations and lectures on a wide range of themes; Landscape Painting, Sculpture and 3D Thinking, and Oil Painting Technique by members of the Academy including Joanna Mules VPRUA, Julian Friers PPRUA and the current president of the academy, Betty Brown.

A wine reception to mark the exhibition finale included a lecture by Dr Denise Ferran, Past President of the Academy, on the influence of Kathleen Bridle on her two Fermanagh pupils, William Scott and T.P. Flanagan. To a packed hall, Dr Ferran explored the background to this remarkable woman artist and how she made her way in the male-dominated art world of the early 20th century. Comparing the technique, composition and light in Scott and Flanagan’s art to that of Kathleen Bridle’s Dr Ferran brought these Fermanagh artists to life. There was much lively debate amongst the large audience in identifying some of the landscapes and streets in the paintings. Final agreement from the Enniskillen audience on Shop Through Curtains was that it showed Hackett’s fruit and vegetable shop in Darling Street, directly opposite Kathleen Bridle’s then lodgings. Many in the audience later knew the shop as the Garden Shop owned by Gretta Maguire.

A native of Fermanagh and a passionate advocate of art education, Dr Ferran concluded her lecture with a plea to Councillor Howard Thornton, Chairman of Fermanagh and Omagh District Council, who was present to officially close the exhibition, for the creation of permanent exhibition space in Fermanagh. The large numbers of the public who attended the exhibition, as well as the number of schools who had participated in the activities over the month, would indicate the enthusiasm and need for such space.

We have a theatre; why not an exhibition centre?

The featured painting is Devenish 1 by Brian Ferran HRUA