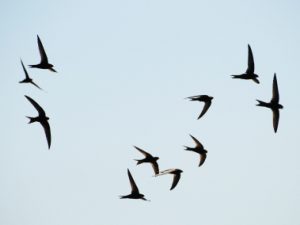 Birds, of course (though swallows are not common yet) but also a general sense of restlessness. Long winter nights encourage us to sleep and let things slide. This issue of Corncrake is a bit late too, but now we are making up for lost time.

The poets of Fermanagh Writers have been busy lately, not only with Women Aloud and the upcoming Meadow Musings readings at Common Ground  on the 29th of April, but also in the ongoing series of readings The Thing Itself at The Happiness Trap in Enniskillen. This on-going series of readings features not only local writers but also invited guests such as John Cummings and an open mic spot for newcomers. Two Fermanagh Writers poets, Teresa Kane and Teresa Godfrey, have works featured in this issue.

Sometimes poetry inspires other arts: Cirque des Oiseaux is a multi-media exhibition based on the work of locally-born poet Maria McManus. Two of her poems Peregrinations and Corncrakes (naturally) are also here. Poet and photographer Steve Downes takes a different tack. His most recent project (as yet untitled)  matches poems to photographs of places. In Poems and Places he demonstrates how inspiration can be found even in landscapes as desolate as our cover picture.

There are other upcoming events too, notably ComicFest 2017, and much more recorded in the pages of The Spark. And there are other Arts to enjoy: John Llewellyn James writes about his varied musical adventures, while Caiman O’Shea celebrates the debut of a promising new local rock band.

If that’s all too hectic, then Anthony Brady has a gentle memoir of his time in that ‘Citadel of the Looney Left; the Trotskyite alternative seat of government’ – the GLC under Ken Livingstone, and nearer to home, Fermanagh Time invites you to consider just why everything seems to run slower here, and whether that might be a good thing. 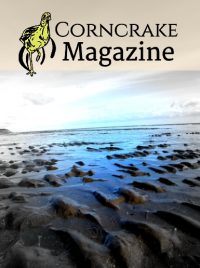