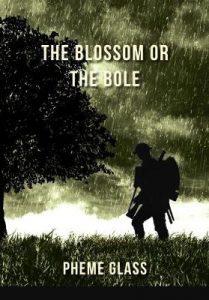 The original idea for this book came from a short story I wrote as far back as 2008 about two boys growing up in the Sperrin Mountains at the turn of the 20th Century. Later that year I was given the opportunity to visit WW1 Graves in Belgium and France, and it sparked the question, why did so many young men go so readily to a war-torn country and how did their decisions impact on the families they left behind.

The Blossom or the Bole is not about the war in Europe but instead tells the story of the two boys, one Catholic, one Protestant, and what happened to them when they made the momentous decision to join the army in 1914.

My characters were very much led by the events which were unfolding around them, as they come to understand fully the implications of a divided community and are forced to acknowledge and deal with them in the midst of turbulent times.

In order that my reader could keep abreast of the Home Rule debate, the War and other news, I decided to insert newspaper headlines from two of Tyrone’s leading publications of the day, The Tyrone Constitution and The Ulster Herald.

The Blossom or the Bole – Prologue

A full moon cast four shadowy figures into bright relief as they climbed up the side of the mountain carrying a long box between them. The night was still, apart from their short white puffs of breath, which filtered into the cold air.

Halfway up they stopped at a low wall surrounding a cairn and left down their burden.  An owl hooted three times. One of the four put his hands to his mouth and hooted three times in reply. They waited, neither moving nor speaking.

A blanket of fog rose from the valley further down, creeping closer to where they stood, swirling around them like a veil. Out of the fog, four more figures appeared. The box was passed across the wall to waiting arms.

No words were spoken. The first four turned and disappeared into the fog.  The new bearers moved slowly up the mountain and were soon lost in the shadow of the thick gorse that surrounded them.

The first light of dawn broke on the muddy street of the small thatched house. A dog growled but was silenced by a low whistle from a man as he crossed the street to the front door. He lifted the latch gingerly to avoid its noisy clatter.

Stepping into the kitchen, he stooped to warm himself over the dying embers of the fire. The night had been successful.

The guns had come at last and were now in safe hands.

The Blossom or the Bole is available locally through  Enniskillen Castle Bookshop; Collage Collective; The Carlisle Bookshop, High Street, Omagh and Sheehys Bookshop, Cooktown. It may also be ordered from Waterstones or other good online bookshops, or from Amazon UK.

Pheme is currently working on a sequel.