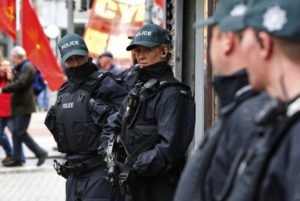 They are all rejects I pointed out, and haggled a deal.

I liked my bricks’ varied colours and considered myself a very smart brick buyer. I built (or, truth be told, a handyman I knew built me) several walls, and still had dozens of bricks left over. These bricks became my friends. I used some to weigh down plastic sheeting in the garden; I used some to prop things up, to stop grass cuttings blowing into my neighbours’ garden, and to stop my trailer rolling downhill.

For twelve years I found many uses for my bricks. Then on 15th June 2013, just as I was about to leave my town centre art workshop to go to a writing class run by Glenn Patterson, I received a text for him.

Did I have a brick? it asked.

Did I have a brick? I had dozens – I could spare him a brick. I had worked out long ago how much each brick had cost me. I knew that, being a famous writer from Belfast, Glenn would not be keen to pay me for it, so I picked him out the most anaemic brick I had lying at the back of my workshop.

I don’t suppose many people outside of Fermanagh remember the significance of the 17th and 18th of June, 2013. The Lough Erne Resort on the shore of Lough Erne was the location of the G8 Conference. British Prime Minister David Cameron was host to Presidents Obama (USA), Putin (Russia) and Hollande (France), Prime Ministers Abe (Japan), Letta (Italy) and Harper (Canada) and Chancellor Merkel (Germany). EU Presidents Barrosso and Rompuy kept a watching brief – Irish Taoiseach Enda Kenny, likewise.

You may think you can imagine the level of security we were all subject to in the run up to the G8, but I doubt if you really can. Bullet and bomb proof limousines were shipped in. Helicopter gunships and drones patrolled the sky. Eight thousand specially trained police officers (almost half from outside Northern Ireland), with thousands of Special Forces to back them up. Two thousand Irish Garda and Irish Army Rangers patrolled the Border.

The hospital was emptied of patients, (honestly), extra doctors, surgeons and paramedics were put on stand-by and rescue services for land and water stood permanently ready for mass casualties. Dozens of judges and court officials were put on 24 hour duty to instantly lock up violent protesters and rioters. Police stations were readied for hundreds if not thousands of arrests; one was filled with empty coffins!

The rooftops were populated by surveillance experts with high definition cameras and the world’s best listening devices – supported by snipers with telescopic sights. The streets and side streets were packed with police and security personnel, and Glenn Patterson, the writer, was asking me to carry a heavy red brick three quarters of a mile to the Saddler’s Restaurant through all these highly-trained, hair-trigger-alert, paranoid guardians of the world’s leaders.

The brick was too heavy to be carried in a plastic bag. I’d have to charge Glenn 5p for it anyway. I thought I might wrap it in brown paper tied with string. No – I might as well have a smouldering fuse poking out of it.

So I opted to carry the brick bare, undressed, in the raw. It would be obvious to all that it was a brick; just a brick. My reason for carrying it could be easily explained and corroborated by one of Ireland’s most famous writers.

My wife gave me a quizzical look as I bade her farewell and walked out of my workshop with the brick securely under my arm. Have you noticed how the brick has now assumed an identity? It is no longer just a brick – ’tis now The Brick. In glorious sunshine I walked past a team of G4S guards outside my workshop. Remember the company – the ones who couldn’t guard the London Olympics? I walked past dozens of protectors of the top eight world leaders and not one stopped me, challenged me, or even looked at with very visible Brick under my arm. Perhaps none of them had ever seen anyone lob a brick before.

I set the brick down firmly on the table in front of Glenn. After introductions and a short discussion, he started the class – assuming temporary ownership. I knew he would do that. I would have to guard my brick. We discussed many writers and their work: Jeffrey Eugenides, Homer and Graham Green. Later, one by one, he asked us to relay our thoughts evoked by the ever present brick, to the group. They ranged from the rapturous, the floral, the florid, the structural, the existential, the minimalist, and the compositional to the plain observational. One resigned writer said it reminded her of her first husband – poor Brick.

The Brick held pride of place as the restaurant staff, mid class, served us tea and scones. Glenn read us Ciaran Carson’s poem Belfast Confetti. All too soon the afternoon passed and the class was over. As we packed away our writing tools our esteemed chairman thanked Glen, wished him well in his writing career and then presented Glen with the brick, as a gift from Fermanagh Writers. We pointed him in the direction of the coach station, wished him bon voyage and watched him set off through the massed ranks of police and security personnel with The Brick under his arm.

For the further adventures of The Brick see: Glenn Patterson: Belfast, a brick and the G8 Summit The Guardian 20th June 2013