The Dead, they see a little at a time.
They go South. They jump through the hole into the other world.
They walk around on the ground. Then they whirl. The whirlwind, people say.
They go up in the sky on a rope, the Dead.

The man they called Ishi did not wish to disturb the Dead. He would not talk of them or say their names, though Kroeber asked him many questions. For forty years he had seen them die. He could count them all, and there was no one left for whom he would singe his hair in mourning. These were his tribe now; Kroeber and Watterman and the doctor, Saxton Pope. He liked his room at the Museum in Berkley, and riding on the tram, eating with Watterman’s family and playing with the children in the park. He did not even mind the Sunday mornings when he was on show. He would sit in front of the wikiup that he had built in the grounds and knap arrowheads out of blue seltzer glass. So many arrowheads – more in a day than he would ever have used in a year of hunting. When each was finished, he would hold it out to one of the many watching children who would come forward, shy as a deer, and sometimes hold it up to the light and exclaim how pretty it was. But to Ishi the glass was simply good to work, hard and true, not like the black obsidian stone. He’d learned that many years before he came to this place, and he remembered the risks he would take for one glass bottle.

This was his home now. So many people, past counting, like the swarms of butterflies that arrived each spring. This was where he would happily choose to die, but as he remembered it came to him that one day the city’s swarm might vanish like the butterflies and he would be left alone again. Perhaps that is why at last he yielded to his friends’ request that he bring them to his old hunting grounds, back to the Dead.

On horseback, they followed the rushing waters of Deer Creek, up from the Sacramento Valley and into the foothills of the snowcapped mountains. There were five of them: Ishi, Kroeber and Watterman, the doctor and the doctor’s young son. He watched the back of the rancher who guided them, and he remembered the names. He raised his eyes to the faraway ridge of Bear’s Hideout. It was six years since White men had last been there, late Fall, surveyors, who found the wikiup of Ishi’s people.

There were only four of his tribe left then; Ishi, his sister, their mother and her brother. The old man was so frail he could only move with help. Ishi’s sister took him to the hiding place by the river at Harpoon Landing. Their mother was too old and sick to move. Ishi covered her with a hide blanket and hid himself. One of the men had a kind voice, she said later. He told the others not to kill her.

The rancher brought Ishi and his friends to his home and made them welcome. He showed them Indian artefacts that he had found, so he said, in an abandoned hut. Ishi watched Kroebur bargain for them, to bring them back to the museum. He knew each one – the bows, the salmon harpoons, the stone tools and the blankets – all that they had prepared to survive the coming season. It was a hard and hungry winter when his mother died.
The others never returned. He had searched for them for three years before fire and hunger drove him South.

They travelled on towards Bears Hideout the next day, leaving the ranch and the rancher behind. That night, Ishi told the doctor’s son he heard the spirit of his sister calling and walked off alone into the bush.

He walked until he came to Harpoon Landing. He sat and watched the waters of Deer Creek as they rolled away in the moonlight. He remembered when he was a child. He remembered the night the hunters came, and the sudden strange barking of the rifles. He felt again the chill of the water as he floated downstream among the dead bodies of his kinsfolk. He wondered why the white men were so anxious to pull them out again; then he saw the knives. Heads five dollars apiece, scalps fifty cents. 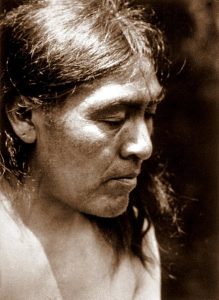 He closed his eyes and pictured the distant sea, and the great city by its shore. Whether it was vision or memory, he did not know – he saw a child with a dark, flat face like his, holding a blue glass arrowhead up to the sunlight. And it was beautiful.

He listened. He heard the coyote call and the wood duck, and he was at peace. He called the Dead by name and they came to him. Each greeted him by his name, the name that was not Ishi. One by one they came to him. His mother was there, and her brother, but his sister was not with them.

In the morning, he told them, I will go to my friends and show them what I may of this land. When we are done, we will return to the city by the sea and I will never speak your names again. But tonight, let us sing the old songs together.

They sang the songs of Coyote and of Wood Duck, though there was no one else in the world of the Living who could understand.

Except, perhaps, somewhere in the city by the sea, an old woman and a child with a blue glass arrowhead.