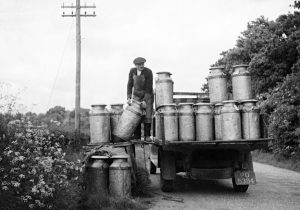 Back when we first joined the Common Market as it was then, a change came to the country. Concrete lanes snaked round hills to farmyards where once the track was so rutted they were more easily approached across fields and ditches.

It was the beginning of the end for the world I had known as a child. The new lanes bound people tighter to a new way of doing things, a way that they had previously kept at a distance.

My father, like many others, had only six cows, still milked by hand. A machine would have allowed him to milk more, but their output filled more churns than enough when each had to be manhandled onto a Scotch cart or the link box of a new-fangled tractor and driven down the old track. In my grandfather’s day, there was a cooperative creamery in the village a mile away, and the milk run was an opportunity to see how the world was going while you waited for your milk to be weighed and to get skimmed milk for the pigs and maybe a little butter as well. Only a few people churned their own butter, like my aunt up the country, who lived at the end of a lane almost a mile long. I understood why when I had to lend a hand with the churning and eat the result.

By my father’s time the town creameries had taken over, so he only had to take the churns to the milkstand at the end of the lane. Every farm had one – a platform built of stone or dug out of a ditch and topped with sheet iron or sleepers from the now-abandoned railway. The milk stands provided a welcome relief for weary legs on Sunday walks, a place to sit and swing your feet and watch the dragonflies. There, each week, the milk churns waited for a flat-bed lorry to take them any and return them empty, their milk drained by strangers. Sometimes, if you knew the driver, other goods might arrive or depart from the milk stand, or you might get a lift to town yourself.

For us children, this thought had all the romance of hopping a freight train in the Old West. Every child was a cowboy at heart. We had no horses by then, though they lived in our memories, like the redundant collars gathering mildew in the barn. My brother, aged two, had once rolled from one of the horses’ back, slid down her hind legs and landed unharmed on the ground. The dividers in the milking parlour were about the same size, but we had enough sense not to repeat that experiment. Horses and cows were friendly and forgiving in a way that inanimate objects were not, no matter how our imaginations might try to bring them to life. We had a favourite cow, called Silver for the most unimaginative of reasons. The Lone Ranger had a horse, we had a cow. I don’t know why we imagined Silver’s milk tasted different, but it was always kept for the house. We drank it raw, cooled in a bucket of water, but it always tasted better with her warmth still in it. When the cows were sold, our neighbour made me a paintbrush out of hairs from her tail.

We knew even then the country was changing. There were few new houses yet – those had to wait for lanes fit for the cars of people who worked elsewhere. The land still emptying, as it had been for a hundred years. We were to visit houses where only old ones lived, and when they were gone, the houses too began to return to the earth from which they came. Thatch grew green and full of nesting creatures, corrugated iron encrusted with ivy, bushes growing from chimney stacks. Sometimes they were used for stores or cattle sheds, but often they were simply left – rotten doors opening onto cold hearths, beds mouldering back into the soil. Sometimes the odd picture was left hanging on the wall, or a rusted tool on the mantel, but we knew we should never take anything from such a house.

The lanes to these houses were so overgrown as to be almost indistinguishable from the fields on either side or else choked with briars and nettles. Sometimes we would come across a house unknown, with, it seemed no lane to it at all. Many years later I found that these were marked on old maps as herd’s houses, relics of a time when children were sent to watch over cattle on upland grazing all summer long, only to return at Halloween, when the gates were removed from the tilled fields to let the cattle back. We too had followed cattle, driving them from field to field, turning them out of gardens. When we saw a stray cow we said it was grazing the long acre of the roadside.

Of all the changes that the new lanes brought perhaps the greatest was the milk tanker. The milk stands have vanished, the milk run is no more; milk goes straight from tank to tanker. In the long-gone time when milk was thin on lean spring grazing and wouldn’t churn, some poor old woman might have been accused of casting a spell to ‘draw the butter’. In more scientific times there was always a temptation to add a little something to the churn to pass the creamery’s tests. Now such things are more tightly controlled, they say; poor milk goes down the drain. Milk is pasteurised, homogenised, sold in plastic bottles and cartons (‘paper bags’ one old man called them.) All this is expensive – far too expensive for the man with only six cows.

The problems of the dairy industry are too well known to recite. The milk tanker led to the mass stock unit, the slurry pit, the automated parlour, strip grazing and zero grazing. Fermanagh fields that once were full of cows now feed only sheep. The creameries have closed; Fermanagh milk is bottled in Donegal and Cavan milk is sold in Fermanagh.

I have no land to keep a cow, nor could I if I had. These days I can drink organic milk again – from ASDA. It’s good, but it’s nothing like Silver’s.

One thought on “The Milk Run”