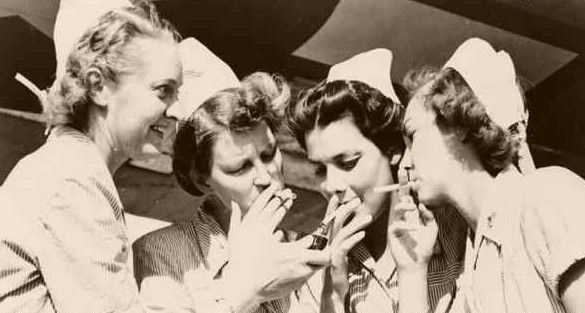 We don’t really know our parents until we look back and do the sums.

She was Maureen O’Halloran. Her father was a sailor.

There was a war on. There were a lot of wars on.

In 1935, at 18, she wrote an article for the school magazine about a day trip to Rathlin Island. It’s witty and includes little rhymes she composed. I think rhyming island with dry land was quite clever.

She was twenty in 1936, training to be a nurse, 23 in 1939 when World War 2 began, and she was a young nurse in London when the bombs came. She was, of course, smoking by then. It was the smoking that would kill her. An ad in the Picture Post of 1941 features a young nurse smiling because she enjoys the benefits of tonic wine when she needs a pick-me-up to help her get on with her work.

Values have changed. We no longer commend to nurses that they drink Buckfast in their breaks. Anyway, mum preferred Vermouth.

She didn’t talk to me much about the dangers she faced though she mentioned the war a few times. She told me how they distinguished between two different kinds of rocket or Doodlebug. Their engines had different rhythms.

My mother had a favourite poem or verse about how we have to accept change.

The moving finger writes and having writ moves on,
nor all your piety nor wit shall lure it back to cancel half a line,
nor all your tears wash out a word of it.

I grew to love Omar Khayyam in later life, perhaps because it connected me to her. Its attraction is that it expresses tenderness, devotion and cynicism and it celebrates wine. The attitude changes from verse to verse as some people, like my mother, would change.

You failed an exam; The moving finger writes and having writ moves on… She could reassure you there was nothing you could have done or she could excoriate you for having missed a moment and all with the same line.

So, born 1916. Young nurse in London in 1941. Married late, everything delayed by the war. One big change around that time was the National Health Service allowing her to get all her teeth taken out and replaced with dentures. My mother and father went together for their extractions in Derry and then downed whiskey together afterwards in Donegal to help them get over it. A lot of their generation, the adults I knew as a child, had no teeth, thought they were better off with dentures.

I was born in 1951. She was 36 years old. And I was one of twins and she had two children before us and two after us. She had all her children, in fact, between 1948 and 1956, between the ages of 32 and 40. That was some decade. As a child you live in a perpetual present. In your 30s time seems to be whooshing past. As a child you do not expect things to change.

When I was seven years old – 1958, the year Pearl Carr and Teddy Johnstone won the Eurovision Song contest with Sing Little Birdie – she would challenge me to run as fast as I could to the shops for five Park Drive and tell me when I came panting back that I was the fastest thing on two feet and had a great future as an athlete. But sometimes I came back without the change, or worse, the fags, and my mother had a temper and would make me walk back to Gilroy’s shop and search every inch of pavement, though there was little hope of finding what was lost.

Ach, she would say, in a tone that said she expected to be disappointed in me, as in everything, for the moving finger, and all that. It has its way.

But she went back to work, nursing in the City Hospital and there was a bit more money for pleasures. Wednesday night was their drinking-out night, and she would sometimes come into the boys’ bedroom and wake us up by showering packets of Tayto crisps over us.

But her fatalism was also a tendency to depressive thinking, whether because she was missing the war years in London, felt she had taken a wrong turning, was shocked at suddenly being lumbered with all these children, having got into her 30s with her options still open, without the moving finger having written so explicit and binding a future for her.

She was fifty in 1966. There were times then when she was cheerful, playful, affectionate. We had holidays in Donegal in a little cottage that belonged to my father’s sister Ena. There was low water pressure. We would save up going to the toilet until we got to the hotel at night for a drink, or go in the field.

She was fine with basic living. The war had taught her that. Toilets hadn’t always flushed during the blitz either. At home, she might have moaned about not having the nice secure life she would have wanted, but on holiday she could almost take pleasure in the simplicity of cooking on a turf fired range, washing her smalls in the sink. She would get tiddly rather than drunk. One morning she laughed about having passed out the night before and shocked me by complaining that my father had not put her to bed properly.

A gentleman always opens a lady’s bra for her when she passes out on him.

I had a sense that that was a line she had heard in a London play, perhaps a joke from among the nurses. This had happened before to someone, for sure.

She was 53 in 1969. The time of change. I didn’t know about menopause. I was only just learning about periods. I had seen the red stain in the toilet bowl and learned not to ask, wondered if we were harbouring someone with an addiction to beetroot. And the bombs were back. And there were soldiers on the streets. And I heard gunfire and explosions for the first time.

My mother had loved British soldiers, had nursed them before. She worked in the Geriatric wards now but would go down and see young men in uniform, young men not in uniform, come into Casualty with bullet wounds, shredded limbs, bloodied. The moving finger had written over them all right, had made a right bloody mess of them.

One night soldiers stopped her round the corner from our house and told her she couldn’t walk down the road to the bus stop at the crossroads because there was shooting down there. She ignored them. Maybe she didn’t care by then if she got shot or not. What was a smattering of rifle fire to someone who had been bombed from the air?

I saw change in her, but wonder now if the sneering and the disappointment was disillusionment, a sense that nothing changed, that the world would always let you down. I didn’t know about depression. But I was beginning to be familiar with the fixity that was clamped on her then by the tranquilisers of that time, and realising that these were what provided the insulation against the shocks of gunfire, ageing, dispiritedness.

I sat with her watching Coronation Street a couple of days after Bloody Sunday when rioters set fire to the Busy Bee supermarket and we heard a cascade of explosions such as I had never heard before.

That’ll be the soup cans bursting, she said. There was expertise here that I could have been drawing on.

She gave the impression that she wouldn’t duck if an RPG came through the window. Maybe that was how she had responded to the doodlebugs, coming to get you, coming to get you. The moving finger had either written your name on one of them or it hadn’t.

Her normal was war, and experience confirmed that it always came back, and that sickened her, that peace was a respite from it that could not be relied on. That hope was folly. That nothing really changed at all.

One thought on “The Moving Finger – A Memoir”