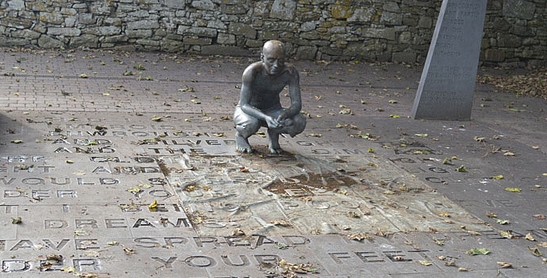 Cast a cold eye
on life, on death
Horseman, pass by!

I was for years intrigued by the structure of this epitaph. I wondered about the rhyming pattern of these three lines which are cut into Yeat’s gravestone in Drumcliff churchyard, Co. Sligo.

The epitaph concludes Yeat’s poem Under Ben Bulben – the sixth and final stanza of which reads:

Under bare Ben Bulben’s head
In Drumcliff churchyard Yeats is laid.
An ancestor was rector there
Long years ago, a church stands near,
by the road an ancient cross.
No marble, no conventional phrase;
On limestone quarried near the spot
By his command these words are cut:
Cast a cold eye
on life, on death
Horseman, pass by!

Why the three lines to form a triplette/triolet when the pattern of words suggest a quatrain? Eye in the first line rhymes with by in the third, but was there a word perhaps that rhymed death in the second line?

It seemed logical that there was a missing line in the epitaph. The instruction to the Horseman was what intrigued me: was he to stop and gaze upon the grave or ride swiftly by hardly pausing to look? No. He was to pass by. Yet, surely there had to be some prior action by the Horseman on approaching the scene? Was Yeats alluding to one of The Four Horsemen of The Apocalypse? If so which one: Conquest, War, Famine, or Death?

What matter: these were the lines chosen by the poet himself. But…

It was only when a poet friend in England was planning a holiday in Co. Sligo and had asked me to accompany him on a tour – taking in a visit to Yeat’s grave – that I once again wondered about the structure of the epitaph. I told him about my theory regarding the epitaph and he agreed that there was a distinct possibility of an original line being part of the epitaph’s structure and that it could well have been omitted.

A couple of days before my friend arrived in Ireland I was reading a book entitled How It Was – A Memoir of Samuel Beckett. In its pages, the author, Anne Atik, recalls a conversation with Beckett, who knew Yeats. Beckett describes to his friend how poets alter their poems and cites as an example Yeat’s poem Under Ben Bulben. He goes on to mention that in the original version of the epitaph Yeats wrote the first line as:

but that Yeats had crossed out those words and continued directly with the final version. Thus by pure coincidence my quandary was solved;

The featured image is the bronze and stone sculpture in the car park at Drumcliffe Cemetery, which was created in 2003 by Jackie McKenna co-founder of Leitrim Sculpture Centre