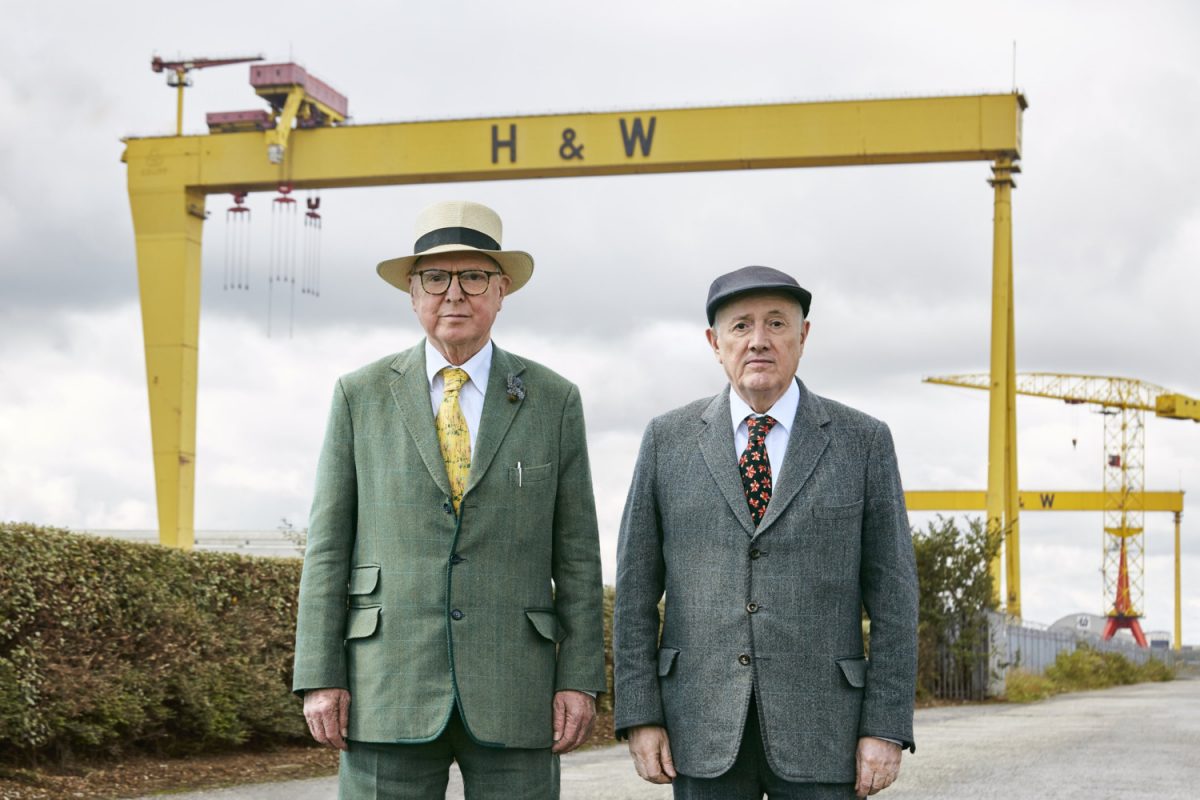 A Review of Scapegoating by Gilbert & George Exhibition at The Mac in Belfast 26 January – 22 April 2018.

I confess I was unsure as to what to make of the controversialist artists Gilbert & George before visiting the Exhibition. Over the years I had seen half a dozen of their works individually in different galleries and I found them interesting and challenging, but I don’t think I really got them.

What hits you first is the sheer scale of many of the artworks. Their size is quite overwhelming and they use a stark colour palette of blacks, reds and whites, echoing the De Stijl movement of the Netherlands in the last century. The effect is confrontational, deliberately so in fact. Then the text, some scrawled as graffiti, in that virulent red, contains words, phrases and epithets which are often aggressive, challenging, rude and in some cases, offensive.

Gilbert & George are offended by religion; they are ardent secularists and committed humanists who, because of their homosexuality, were cast in the role of outsiders and excluded. Instead of simply accepting the straitjacket of narrow-minded judgmentalism they used it as they used themselves – as the basis of their art, to provoke, to challenge, to question the very nature of what opposed them. Religion tried – and today still tries – to paint them as scapegoats for all the ills of the society that we endure. In this exhibition they have turned that on its head and have responded by challenging religious dogma.

They have taken the things they find on their doorstep in the East End of London; from the images of women in Whitechapel clad in the traditionalist black burka to the disposed-of metal cartridges of nitrous oxide (known as laughing gas or hippy crack) scattered in the gutters or littering back gardens. These look like bullet-casings, or eerily like the German bombs that used to fall on London during the Blitz.

The figures of the burka-clad women seem anachronistic, alien and even demonic – for instance in Vallance Road. They are castigated by the political Right as being foreign and un-British because they hold onto their religious and cultural identity in such a visible way, that threatens this ideological group, because of the assertive demonstration of their otherness while on the Left they are seen as victims of an illiberal, misogynistic and backward-looking patriarchal culture; yet many devout Muslim women appear to reject any emancipatory aspiration. To both groups the burka-clad women are an all-too-convenient scapegoat and are targeted as such, cast as the contemporary bogeymen.

Gilbert & George show they feel an empathy towards them and the often ugly situation they find themselves in.

The compositions also include their own self-images, a leitmotif running through all their art, standing square-on, be-suited and in sentry formation; sometimes no more than a transfer – a ghost-image, or dissected into ribbons and strips, or even disarticulated into their component parts.

Experiencing these images in such a visceral way, in huge cathedral chambers, where they bear down on the awestruck viewer from the white-washed walls, I found myself tremendously moved.

This is how Gilbert & George would wish it. They are contemptuous of what they see as the cold, sterile art for art’s sake of the work of many of their peers, produced with a sneer at the ordinary man and woman in the street. They are fully engaged with the world on their doorstep: their love of London, Britain, and the people – comes blazing through their images.

In particular, there is a film from 1980 entitled The World of Gilbert & George which is shown on a loop. You can join it at any time because it is a series of images, commentaries, observations, poetry and dialogues. Highlights for me were the middle-aged drunk, ruminating on his life; a naked, semi-erect, young man, defiantly smoking a cigarette, thoughts and emotions playing across his face, as if it was a movie on a cinema screen; and the artists themselves dancing to Bend It by Dave Dee, Dozy, Beaky, Mick and Tich.

I think what struck me in particular, was that when you entered the lift to the Galleries, there was a transfer-printed message from the artists – With Love from Gilbert & George; and this was what this Exhibition was for me – a secular humanist love-letter to humanity itself from the artists; and it was beautiful.