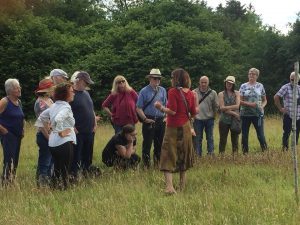 Viewed from above, the “Emerald Isle” is indeed very, very green. Unfortunately, from a conservation point of view, the lush, uniform grassland that dominates our 21st-century landscape is the wrong shade of green.

A traditional hay meadow, seen from a distance, has varying shades of brown, green and even grey. This mottled sward is created by a variety of grasses, sedges and rushes, all co-existing with one another. Mixed in are colourful wildflowers such as Lady’s Smock, Ragged Robin and Oxeye Daisy. Each of these species occupies a slightly different ecological niche that fulfils their varying requirements for light, soil moisture and acidity. These meadows are a haven for wildlife and, on a fine summer day, they are brimming with insects, birds and small mammals, all finding food, shelter and even a home here.

A traditional hay meadow was cut at the end of the summer when grasses, sedges and flowers had completed their annual life cycle and produced seeds, which were scattered during the haymaking. This laid the foundation for next year’s colourful carpet of flowers, grasses and sedges.

Once the hay was gathered farmyard manure was spread, which continuously improved the soil structure and replaced the nutrients that were removed with the grass crop.

The key to this rich and diverse meadow plant life lies managing the nutrient levels of the soil. If these are kept relatively low a great number of plant species will co-exist in competition, and no single species becomes dominant. In our best hay meadows, up to 30 different plant species can be found per square metre. The sward never becomes too thick, allowing light to reach the ground, where moss thrives and ground-nesting birds make their home.

Compare this to an intensively managed silage field. A seed mix is sown which often contains a mere two types of highly productive grass varieties. Continuous application of chemical fertilisers creates extremely high nutrient levels in the soil, resulting in a uniform, lush and often very thick sward. Our more delicate native plants do not have a chance. As few as four plant species can be found in one square metre of highly productive agricultural grassland, and none are nectar-producing flowers.

These emerald green silage fields are replacing our meadows one by one. Unfortunately, they are largely devoid of life. Intensively managed grasslands have little value as habitats. Without flowering plants, there is no nectar or pollen for butterflies and bees.

As our meadows disappear, so does the wildlife that depends on them.  Ground-nesting birds such as meadow pipit and skylark struggle in the overly thick, impenetrable grass sward. With up to three silage cuts per year, the likelihood of successfully raising their broods is low, even if they do attempt to nest there.

Only 2% of the species-rich meadows that existed in the 1930’s remain today in the UK. They have been lost mostly to intensive agriculture. This is not just a loss to the rich biodiversity of our land, but also to our cultural heritage. Just think of how many poems, songs and paintings were inspired by butterflies, flowers, meadows and haymaking.

How do we get our meadows back? It can be done, but it is neither quick nor straightforward. Once nutrient levels are high in the soil, especially in clay soil, they tend to stay that way for a long time, even after the application of fertiliser has ceased. Simply planting ‘plugs’ or scattering seeds of wildflowers will not work in the long term, as the more vigorous grasses will out-compete and smother them.

The nutrient levels of the soil need to be permanently reduced for lasting success. One rather severe method is to mechanically remove the upper layer of topsoil, which is where the nutrients are concentrated. A far gentler way is to continuously remove the ‘biomass’ from the area. With extremely species-poor and uniform swards several cuts a year can be carried out initially. All cut material is removed and no fertiliser of any kind applied. Gradually, the plant life will naturally become more diverse. If necessary, it can be encouraged by planting ‘plugs’ of wildflowers or application of seeds. Make sure you use a trustworthy supplier of native material!

There is also an amazing ‘helper plant’ for the aspiring meadow restorer: Yellow Rattle or Hay Rattle. It is a semi-parasitic species of native flower. Underground, it seeks out the roots of grass species and quite literally steals nutrients from them. Once weakened, the otherwise dominant grasses will lose some of their vigour, allowing a more species-diverse sward to develop once again.

Whether you are a farmer working on many hectares of land or only call a small front garden your own – restoring a piece of meadow to its former glory is a challenging, but worthwhile undertaking.

More information on how to restore meadows can be found at magnificentmeadows.org.uk