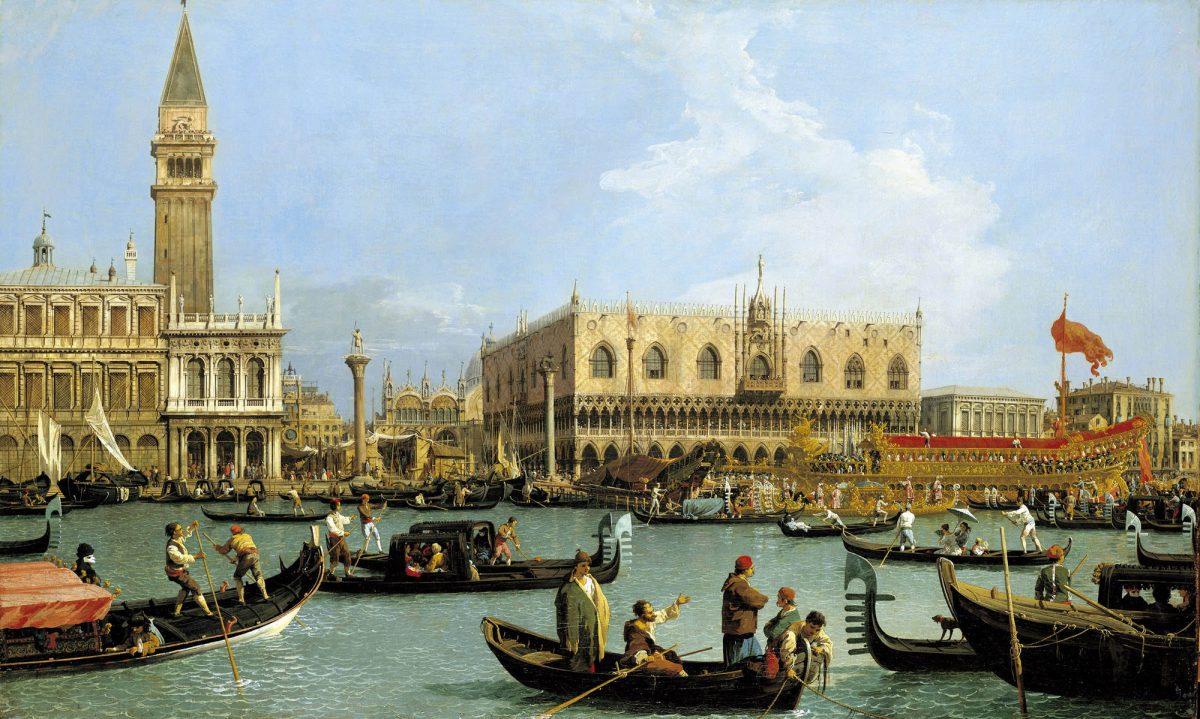 It is always strange, booking an appointment to see a gallery exhibition; I am more accustomed to rolling up to such events at my leisure. This introduction of formality about the arrangement lends an air of anticipation and expectation. After negotiating the eccentricities of the Luas tram system I made my way to the National Gallery, glancing frequently at my watch as I did not wish to be late. The exhibition itself was held in a small adjunct to the main galleries with its own reception area and serviced by young, fresh-faced attendants.

Canaletto was so named as a pet diminutive form of his patronym of Canal, and it is by this he is known to us today. Born and raised in Venice at the turn of the 18th century, when Venice itself was still an independent city-state, he painted what was around him – the canals, the ornate architecture, and the people who lived and worked in the beautiful, aquiferous city. He became known for his precise renditions, filled with the most intricate details and yet there was a conceit to his work, he would subtly alter the size, shape and positioning of some of the buildings, to create a more ‘perfect’ perspective. It was kind of like not letting the facts get in the way of a good story. The narrative that he created in his paintings, was of an idealised version of what was actually in existence.

He was also noted for his vibrant use of colour, the brilliant marine colours of his canals, were again an idealised realisation of the actual colour of the water, which was a rather murkier greyish brown. The sun always seemed to be shining in Canaletto’s Venice; he captured the light in his paintings so exquisitely, it appeared that he had stolen a handful of glittering dust from that great golden orb and sprinkled it like precious gold onto his artists’ palette.

In the oral guide to the Exhibition, I discovered that Canaletto’s great patron and benefactor, Joseph Smith, a wealthy English banker, was responsible for conveying much of this work, to visiting English gentry and ensuring an enduring appreciation for this Venetian painter that continues to this day. Smith also created the special gold-panel frames for Canaletto’s work, which further drew in the ambient light and enabled the colours to increase their intensity; unfortunately, George III, who bought Joseph Smith’s collection in 1763, ruined the effect by butchering many of the frames to satisfy a penchant for gratuitous rococo carving.

I confess I was somewhat sceptical of his work prior to seeing the exhibition; I wanted a little more than Disneyfied verisimilitude picture-postcard views of the great city of Venice. Nothing quite prepared me for seeing these pictures in the flesh, so to speak. They really do shine like gemstones. The prismatic quality of the colours really took my breath away. I was drawn into the pieces as I studied the detail. I began to hear the sounds of Venice, elicited from my own memories: the continuous lapping of the waters against the masonry; the shrieks of sea-birds, the thrum of a crowd and the occasional chunter of the vaporettos. The deep briny smell of the waters caused my nostrils to twitch as if assailed by some invisible flying insect.

Wow! I said to myself; this was what Canaletto was about. He wanted those who had visited Venice to have a perpetual reminder of what they had experienced; their own personal magic-box carrying a tiny sliver of the soul of Venice. They could then invite other people to gaze upon the beauty of Venice as they recalled their own adventures in the city.

I left the Exhibition hours later, weighed down by a hefty catalogue of the Exhibition and a whole new appreciation of Canaletto, the man and the subtle genius of his work.

The featured painting,  The Bacino of San Marco on Ascension Day, c.1733, is in the Royal Collection.