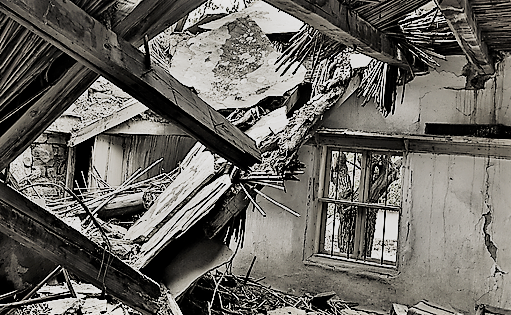 To say things had been tight, lately, wasn’t so much putting it mildly as telling downright lies. There hadn’t been an order in weeks; not since the firestorm, when the bullets came, like mini bombs on the wind.

Uther had one of the very few businesses that hadn’t been hit. He still had his little general store, and his van, which he could still fuel because almost all the other vehicles had either left or not made it, so there was no competition for petrol. He knew it wasn’t exactly logical, but he kind of felt guilty about that.

Despite the stark lack of footfall in the shop, he’d opened it dutifully every day, sticking to his usual hours for the most part and even staying open later on some nights, just in case. All of the perishable items were gone within the first three or four days, mostly consumed by himself and his husband, Mike, with some having to be regrettably dumped – another thing to feel guilty about – but Uther still had most of the rest of his stock, and he knew people out there needed them; it was just that, with all the devastation, no one was exactly in a position to place an order.

Except, on this one day, a request came in over the radio, the signal weak and voice barely audible. Uther had to ask the person to repeat the list of items just to be sure he’d got it right. It wasn’t a big order, or anything – in fact, it would have been considered tiny compared to what people would order pre-war – but here in the post-war place, it gave Uther hope. Where there was one customer getting back on their feet, more were sure to follow. At least, that’s what he reassured Mike. Uther wasn’t sure he looked all that convinced, but he tried not to notice.

So here they were on the broken, potholed road driving to the delivery address with three cans of tomatoes, four boxes of powdered mash, a couple of small bottles of water, six bars of chocolate, and the largest bag of dog food they had – the customer had used those specific words when requesting that item; they were quite insistent about it, and Uther just had to hope that the food was actually being purchased for a canine, the alternative too unpleasant to consider.

Silently, he prayed it wasn’t a trap laid by thieves meant to get them out in the middle of nowhere. That was another possible scenario he hadn’t shared with Mike. There was no point distressing him, after all.

The van crossed over into the side of town that was mostly unscathed on the outside; where the road got rockier for a quarter mile, then evened out. The buildings on this side of the river were still standing but people had fled out into the country regardless, making the empty streets look like something out of a horror movie. Uther shivered. Mike looked over at him and he forced a smile before turning his eyes back to the road.

Up here, he said, mostly to fill the silence, On the left. It should be… he trailed off as the house in question came into view. Unlike all the rest, it was a shell, being held up by the buildings on either side. From the burned-out husk, three children appeared along with an extremely skinny-looking Great Dane that was still bigger than the combined size of the kids.

The tallest child approached the van. Uther rolled down his window and got her to confirm they were at the right place. He was pretty sure she was a girl, though it was hard to tell from the rags she wore. He hadn’t been able to distinguish the gender of the person over the radio, either. The kid’s face was obscured by a thick coat of soot that she’d clearly rubbed at but hadn’t tried to remove fully, and there was a kind of darkness to her eyes. Uther had to look away to stop from staring.

Uh, you placed an order? he said, trying to move the transaction along. The kid nodded, holding out a small, tight roll of banknotes that were covered in grime. Uther took it, quickly unrolled and totalled the money – three five-pound notes; one pound less than the value of the items – and curled it up again to shove in his pocket. A fleeting thought occurred to him that maybe the money wouldn’t do him much good anymore, anyway, but he dutifully ignored it.

He swallowed, exited the van, and walked around to the back where he tried to make small talk as he unloaded the items, commenting on the cold nights that had been creeping in, but the girl said nothing more. The longer Uther looked at her, the younger she appeared. His heart clenched when she had to drag rather than carry the bag of dog food. He’d have offered a hand, but the Great Dane was keeping a close eye on him, a low warning growl in his throat making it quite clear he wasn’t to come any closer or make any sudden moves.

The three kids and the dog stood there, staring, as Uther got back in the van. He shared a look with Mike, and then started up the engine, heading for home – the flat above the shop that was void of life aside from themselves.
Uther toyed with the idea of saying to Mike that they should take the kids and the dog back with them – putting it out there in a jokey way that he could deny really meaning if his husband took it badly – but that thought got discarded too. It wasn’t a time for jokes, and three and half extra hungry mouths to feed was no laughing matter.

Eyes followed him down the road in the rear-view mirror.

Ellie Rose McKee has been writing poetry and short stories since primary school. She has been blogging for ten-plus years, and is currently seeking representation for her debut novel.