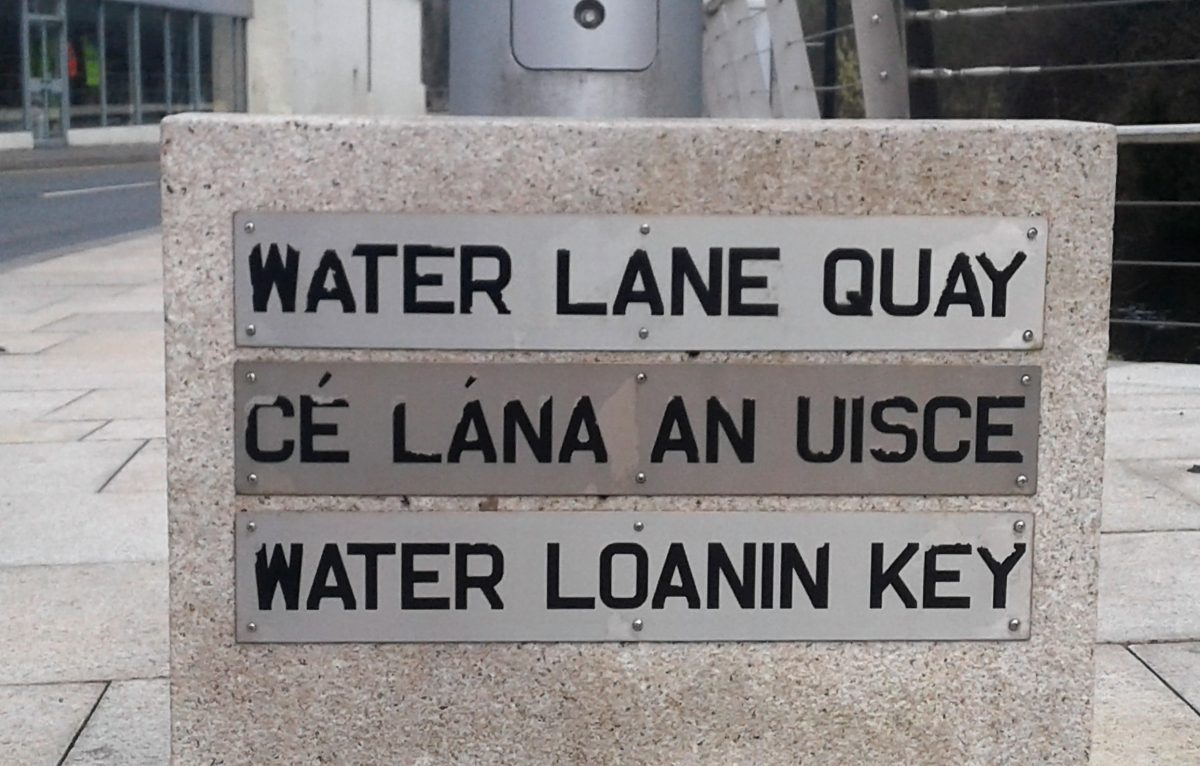 Recently, Unionist students at Queens have been protesting about bilingual signs. While claiming no disrespect for the Irish language as such, they view them as divisive sectarian symbols under the terms of the Flags and Emblems Act. They suspect that those who push the bi-lingual agenda are interested in only three words of Irish – Votáil Sinn Féin.

But of course, Irish is not the property of one particular politics or religion. I have known Unionists who were fluent Irish speakers but were unwilling to admit that to their colleagues. It has been the policy of the UK government for some years to support minority languages. Bilingual education has led to something of a renaissance in both Welsh and Scottish Gaelic. Learning Irish can be a very British thing to do.

Bilingualism is not uncommon. In fact, around 50% of the world’s population speak two or more languages fluently. This is largely because of the expansion of a few colonial languages – Mandarin, English, French, Russian, Arabic, Spanish. Most of the world’s languages have even fewer speakers than Irish has. Their native speakers, in order to thrive in the modern interconnected world, need one of the major languages as well – and it is usually obvious which one. For native speakers of one of the major languages the need for a second language is neither so urgent – nor so clear.

Linguists distinguish the two classes of language as langue and parole. Langue is your native language, your mother tongue, that which you speak without needing to be consciously aware of its structure or constraints. Parole is the learned language, the one you need to communicate with those who do not understand your mother tongue.

It is only natural that someone whose mother tongue is also a parole should be suspicious of anyone who understands it but refuses to use it. That prejudice even extends to overheard conversations – minority speakers are accustomed to having their conversations interrupted with the injunction to ‘speak English!’ There was even a case recently where a barman was sacked by his boss (also an Irish speaker) for not speaking English to bilingual customers. It doesn’t only happen with Irish – the experience is also common for French speakers in Canada or Spanish speakers in Texas. No minority language is safe.

Yet even monoglot English speakers speak two languages. We have to be formally taught to speak ‘proper English’ – English-as-parole, and we, too, have felt the shame of being despised when we use our mother tongue. Polite English, for example, does not have a plural form of the second person but nearly every vernacular version does, and native speakers recognise the difference even if they cannot put it into words. Go deeply enough and all rules are obscure until you try to explain them to an outsider. Lately, I introduced a French girl to the ubiquitous adjective ‘wee’, and only afterwards did I realise that when someone asks you to ‘take a wee seat’ they are of course saying nothing about the size of the chair, but something important about how long you can expect to sit there.

Langue gives voice to our particular experience and that of our community, or rather the many communities to which our ancestors and our neighbours’ ancestors have belonged, right back to the dawn of time. Irish is a deep part of that history. It is there in names and place names, in the words we use unconsciously, and in how we use them. Like all living language, it changes and evolves continually. Your mother tongue is never exactly the same as your mother’s tongue.

Parole is important for efficient and urgent communication, but express precisely what is in your heart you need to use your mother tongue and risk misunderstanding. The commonality of formal grammar is not the only possible communion. Language is not a form of mathematics, to be constructed out of a limited set of formal axioms. All languages borrow from each other. As someone once said, English does more than that – it follows other languages down dark alleys and mugs them for their vocabularies.

And writers, of course, steal all the time. We make stuff up. We drop hints, we twist words to mean two or more things at the same time, we say things while seeming to say the opposite. We invent whole languages. Why? Because we understand that not all that can be said can be said plainly. Understanding takes effort and imagination, and a willingness to question your assumptions, but the world is more full of meaning than any one person is able to grasp.

Sometimes, of course, another’s understanding is not even the point. My own mother was reared in West Cork, where people spoke both Irish and English to their cows because they did not know which they understood better. She never learned Irish formally but picked up many words. Being a well-brought-up Protestant girl she very rarely swore, but when she did she swore in fluent Munster Gaelic.