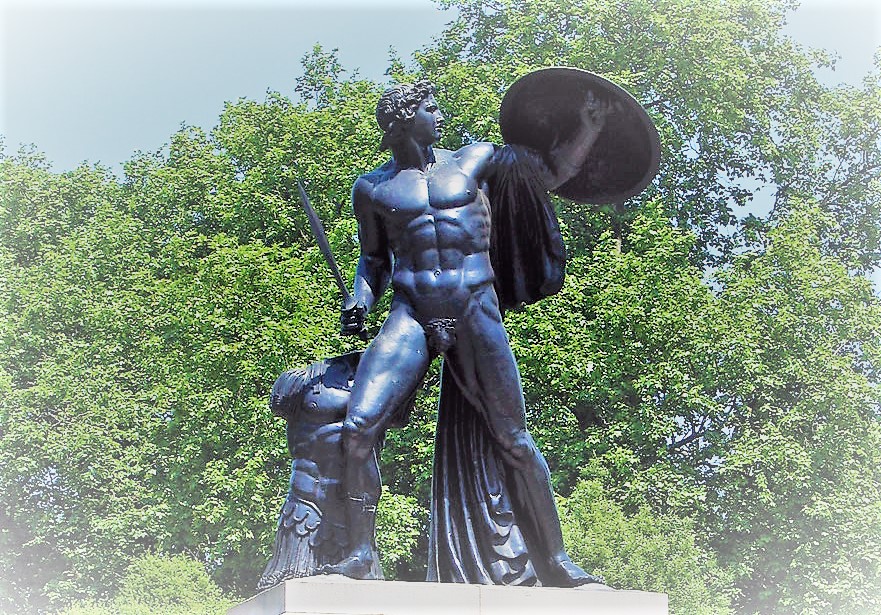 I would not be surprised if you did not believe there is a connection with fireplaces in Enniskillen’s Castle Coole, and the largest naked statue in London. Yet, in truth, I have informed knowledge of the aforementioned artefacts. Forgive this shameless plug: I wrote a tour of Castle Coole in verse, some copies of which may still be bought in Collage Collective in the Buttermarket or in The Stables at Castle Coole. As a House Guide in the years 1997-2000 I often described the tiny detailed artistic features exquisitely carved by Richard Westmacott in the four marble fireplaces positioned in each of the House’s ground floor rooms. I would conclude: Ladies & Gentleman, make sure if you are visiting London to view his remarkable statue at the Wellington Memorial in Park Lane. Westmacott was truly a master of the monumental as well as the miniature.

This was London’s first public nude sculpture since antiquity, based on an original on the Quirinal Hill in Rome thought to have been by the Greek sculptor Phidias. The Monument is dedicated to Duke of Wellington and is sited near Hyde Park Corner. It depicts the Greek hero Achilles in blackened bronze. The statue itself is 18 feet tall and stands on a granite plinth of equal height. The inscription reads:

To Arthur Duke of Wellington
and his brave companions in arms
this statue of Achilles
cast from cannon taken in the victories
of Salamanca, Vittoria, Toulouse, and Waterloo
is inscribed
by their country-women

The ‘country-women,’ many of whom had lost brothers, sons and lovers in the Napoleonic Wars, had subscribed a total of £10,000, a massive sum in those days. The subscribers had been asked to decide whether the colossal figure ‘should preserve its antique nudity or be garnished with a fig-leaf’ (a majority voted for the leaf).

The statue weighed well over thirty tons, according to the Gentleman’s Magazine of the time. It used the metal of twelve large cannons, and half as much again besides, covering a core of plaster and cow dung. Brought to the site on the seventh anniversary of the Battle of Waterloo it proved too massive for the gate, and so a wall had to be broken down to admit this trophy of a Victor more glorious than ever threw lustre on the resplendent annals of immortal Greece.

The Monument did not receive unanimous approval. Quickly dubbed ‘the Ladies’ Statue’, it was the subject of a famous cartoon by George Cruikshank, reproduced below, in which it wears a pair of the Duke’s famous boots. The Paddy O’Killus title is a jibe at his Irish birthplace, something about which he was particularly sensitive. Being born in a stable, he once said, does not make you a donkey. 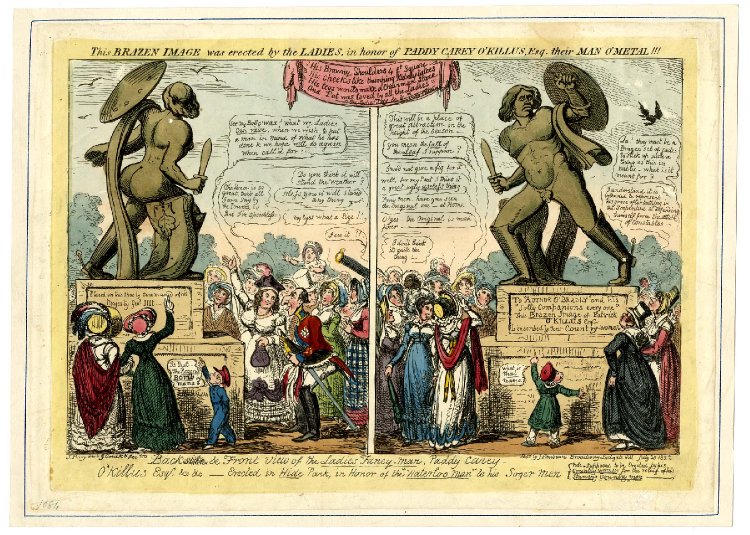 While training as a bus borne commentator/guide with London’s Big Bus Company in 1995, the principal instructor, over a drink in The Tipperary Pub, related to me another version of the unveiling. (For those who don’t know, when English WW1 soldiers sang ‘It’s a Long Way to Tipperary’ they were not singing of the Irish County but the famous pub in London’s Fleet Street) According to him, the statue was anatomically correct, and the fig leaf affixed later in the offending part of the monument’s anatomy. This proved to be an attraction to the students of Oxford and Cambridge who regularly ran contests to remove the fig leaf and carry it off to whatever college as a trophy until, eventually, a large scallop shell was welded in place and preserves Achilles’ modesty to this day.