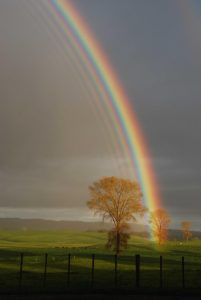 The Girl With Rainbow Hair

I never really knew you
That’s the sad truth of it;
Just a smile and a chat
In my morning paper shop
When you were on shift.

You would colour your hair
In a range of bright hues;
A rainbow formed a halo
Around your fair head.

I would have liked to have
Known you so much better;
But we never met outside
The shop where you worked.

I still see you now and then
In the sunshine after the rain;
A bridge where dreams are cast
Between far, far away worlds.
Your light diffused in a rainbow
Never to be extinguished.

A year ago in Enniskillen, Christmas 2016, a young woman died at too young an age, or so it felt to me. I only ever had a passing acquaintance with her; she worked in the shop where I would often buy my newspaper and she was always friendly and pleasant towards me, but it was no more than that. The news of her passing, though, fairly took the wind out of my sails; it affected me more than I expected; the only way I could express myself was to write this elegy.

One of the things that struck me at Shauna’s service was the huge crowd of people who attended; it seemed that she touched the lives of many people in so many different ways. I was far from alone in my grief. People often make the error of believing that funeral services and memorials are for the person who has passed. They are not, they are for those whom the dead have left behind.

I have thought of her often in the year since she died, especially when the sky crowns Lough Erne, outside my front door, with a technicolour coronet of a rainbow. Like many people before me, I have questioned the function of grief; when it is all too late for the person who has passed on. What is the point of grief when the person is lost to you?

2017 also saw the tenth anniversary of my father’s death, but his passing sits lighter with me now, even though I think of him oftentimes still. My memories of him are warmer, gentler and much more comfortable and pleasant and are now a source of joy in my life.

I wish the same was true with my grief about Shauna. I would’ve liked to have helped her if I could – if she had let me; but then, who am I to presume such, when she had so many people around her who she knew much better than I? That is what hurts; the frustration and anger at feeling that this young woman had no just cause to go so prematurely.

Is it then a function of grief, to quicken the blood and stir us into action, either in word or deed? The walls of Jericho came down after seven years of marching round and round, making noise with raised voices, banging drums and the stamping of many feet.

I think the honeyed words of the Prince of Lies could be defeated if we spoke up more, created a clamour that could no longer be ignored. Depression, like other mental illnesses, is not a weakness, it is not something that we should ever be ashamed of, it is an integral part of the human condition. Why do we need to apologise for being human?

When we find ourselves in trouble, when everything feels bleak and hopeless, we can reach out without any fear of scorn or rejection, to find love and understanding.

I have been living with mental illness for over 25 years now, I am lucky to be surrounded by people who love and support me. I still struggle daily, but knowing that they are there, gives me the belief to carry on fighting. In my grief with Shauna, it has reminded me that though the struggle is hard, it is always worth it, because you never truly know how much you affect other people. St Michael’s was thronged with people at her service, she only needed to reach out, but on this occasion, she did not feel able to.

We have to talk with each other more, we have to share with one another more and with those who are shy and reticent, we have to reach out our hands and draw them closer to the hearth.

I still see Shauna, surfing the rainbows; it still hurts and yet I am glad that it does so.