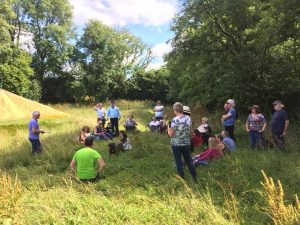 I wrote the following two short poems recalling memories of my Aunt Tessie and Uncle Charlie. A sister and brother of my father’s they lived in a thatched cottage at the end of Tempo Main Street in County Fermanagh. They were the last to live in the cottage where my grandmother and grandfather had raised fourteen children, seven boys and seven girls, born from the mid-1890’s to 1919.

The farm existed right up until the mid-1980’s and as children in the 1960’s and 1970’s we spent our summers in the hayfields in Edenmore, in the hills above Tempo village. The route to the hayfields from the cottage was in parts a steep uphill walk, Conolly’s lane, which ran for half a mile. It was hedged all the way with hawthorn, beech and at the top hazel and a stream with a waterfall crossed the lane about midway to the hayfields. This stream ran from the top of Edenmore and was crystal clear. We all drank from it, the cool water cupped in our hands, or carried in bottles to thirsty workers in the hayfields.

An old disused well sat near the bottom of the lane just opposite the waterfall and above Nixon’s small pig shed. It was hidden in the Summer behind long grass and when we peeped through this we could see it was the abode of many pond creatures like frogs, waterboatmen and pond skaters.

Aunt Tessie made the tea for the hayfield workers and carried it up the lane. It was a great relief to see her emerging over the brow of the hill, a basket in each hand and Lassie the sheepdog at her side. We knew that soon we would be sitting down, resting our tired limbs and enjoying slices of buttered fresh fadge bread and jam, washed down with cups of warm sweet tea.

Tessie,
I still see your smiling face,
hear your soft voice calling
“Hello Frank”
watch your light graceful step in a flowered dress
up Conolly’s lane and lighter over Conolly’s stream
past the deep glen, your arms straight with the weight of two baskets.
Through the gap now and a lilt of a walk across hay felled meadows
smelling of summer.
Teapot steady, tucked in with crushed newspaper
milk swishing in a bottle
newly baked and buttered fadge
and jam for “anyone who wants it”
and Lassie at your heels panting from the heat.
Seated under the big beech
we drape ourselves on humps of hay
and wait
and eat,
no talk,
we feed the hunger first
then the dog with dunked crusts.
You join us, bring laughter to the work
while Lassie sits in the beeches shade, moist tongue quivering.

Charlie McPhillips was Tessie’s brother, and the last to work the farm. He had worked in the era of horses pulling “tumbling paddies,” old metal hay turners and rakes. In the early 1970’s he bought a Massey Ferguson tractor. Starting in his later years he was not the best of drivers and indeed his driving ability was probably well summed up in a comment from my father, He never learned to drive until he wasn’t able to.

It did not stop him though and he took to it with great enthusiasm. His hand signals would be followed by an immediate turn in the pointed direction and God help any vehicle that was behind him trying to pass. He loved passengers, and as children sometimes three of us would join him, one on each mudguard and the other holding on to the back of his seat standing on the tow hitch. We did not think it then, but it was probably not the safest place to be –  especially when Charlie let the clutch out like a rocket. We did not care, we loved the excitement of driving with him and he continually fooled us by saying hello to imaginary people in the ditches and fairies peeping out of glens. He caught us time and time again. We loved him.

Charlie, the waterfall still flows but the well is gone
and diesel smells from phutting pipes on Masseys no longer linger,
caught under the beeches canopy.

I still feel our fingers,
tight to painted mudguards,
hold on for dear life,
waiting on the clutches slip,
Our knees tight, reddened,
peppered from tedding rucks
on brush bristled crew cut hay.

Then screams of joy,
we rocket forwards with you, Charlie, in command,
past piles of twisted straw hay ropes
wound in balls like giant spikey wool
through clouds of grey/blue smoke,
our shoulders brushed with hazel leaves.

Then freewheel let her go
Yooooo!!!!
And make a breeze at last to cool our sweaty bodies.

Conolly’s lane still exists and parts of it remain the same as in the 1960s. A walk through the dark tunnel of hazel at the top will bring you into the old hayfields. Anthony Mc Phillips (the youngest of the Mc Phillips family) is alive and well at 99 years of age and living in New York.