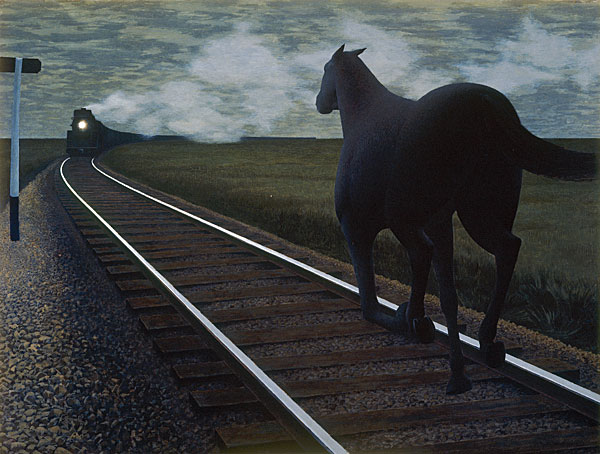 If there is a leitmotif running through contemporary art it is one of questioning, and in particular there is the omnipresent – What is it trying to say?  When I look upon Alex Colville’s seminal painting of Horse and Train (1954), it makes me want tell a story. It makes me want to tell more than one, in fact.  I do not pretend to know what Colville intended with the painting, but that for me is the quintessential character of the work.

The stories that this painting tells are allegorical. One would find it hard to construct a feasible scenario where a stallion may seek to tackle a steam train head-on. Note the landscape depicted in the painting, it is barren and flat and in surreal hues, set with foreboding grey skies. Although there are vast plains in Colville’s Canadian homeland, this landscape is a surreal representation. It would be familiar to his audience and yet alien and perhaps apocalyptic. Also the perspective is somewhat unusual in that it presents the muscular posterior of the black stallion in the forefront and diminishes the more powerful steam locomotive into the distance.

The depiction of the diminishing railway track also significantly foreshortens the perspective, making the two characters in the play appear far closer than they actually are. This adds a tension in that a disaster appears imminent and gives the viewer an intimate and perhaps uncomfortable front-row seat.

It could be a representation of an inter-generational relationship, perhaps a father and a son in crisis, as the two seem hell-bent on going head to head – the older man, stubborn and headstrong, defying the rational convention against the blind, unthinking and unfeeling armour-plated determination of the young buck, ploughing on without consideration. It could be telling the story of a farm and the need to adapt to the changes brought about by emerging technology and consumer demand in the wider society. Another story takes in the wider context of the 1950’s, where the world and its peoples emerged shattered and broken after the second world war, technology bringing unheralded change to how we live and ultimately how we are as people. The old certainties of the past being challenged by radical new thought, with little time taken, or so it seemed, for reflection and due consideration; those were worrisome times.

I believe that the stories implicit in the work have important lessons for today. We are once again going though times of great uncertainty, technological and societal changes conjugate once more to unsettle and unnerve, the questions that arose when Colville first produced the work are with us again.

Horse and Train is exhibited at the Art Gallery of Hamilton Ontario, Canada.

Image from the official site of Alex Colville 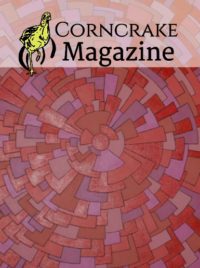 Corncrake magazine was conceived over a cup of coffee at Pete Byrne’s kitchen table one Saturday morning two years ago. Pete, Tony Viney and I had gone back to his house to ‘have a chat and a coffee’ after a Fermanagh Writers Committee meeting, when out of the blue he suggested we should publish a … END_OF_DOCUMENT_TOKEN_TO_BE_REPLACED