The decade 1912-1922 brought many changes and whilst there is a justified focus on the horrors of the First World War, there were other socio-political phenomena like the Woman’s Suffrage movement. The circumstances of the war brought into sharper focus the role of women in our society and was a turning-point on the road towards greater gender equality.

I was surprised, intrigued and delighted as a poet to receive this voice and it is a great pleasure to paint in this little historic detail and to share it with my friends.’

In the end it was not the endangerment of my soul
That occupied most of the concerns of my Father;
Nor even the base corruption of my innocent flesh
That still brings such potent flame to feminine cheeks
With the very recollection of memories too candid
Rather it was the fated encounter with a wilder mind.

How do I explain this to an unfettered generation?
Whose lives are lived unencumbered by convention
With preternatural sophistication that astounds me so.
My girlhood was spent at some ease in a gilded cage
Peering out onto a world that was changing too fast;
A Fairground carousel that would not pause for me.

My Grandparents had lived through the Crimean War
Many were unmanned by the tumult of those times
Bestowed their children with the fragility of life.
My Father sought solace and comfort in the Church;
After his Boarding school, College and Seminary
He secured a comfortable parish in a rural idyll.

My Mother lived in a place that I never visited;
She only decorated the diorama of my childhood
A mute swan floating serenely from room to room.
Outside she glided from house to automobile to shop
Or wherever her ethereal presence was commanded
With seeming little volition that you could call hers.

I was raised in a Parsonage of generous proportions
Yet so much was off limits by my Father’s dictate
I was escorted to family rooms by dear Nanny Grace
Until I retraced those exact same steps on my own.
No other thought ever occurred to me to do different
I fell into line with scarce plaint from a rebel heart.

I was seventeen before I slipped the captive bonds
Father somewhat assured of my mature sensibility
To go walking in the woods or down by the canal.
The untamed young men of his fevered imaginings
Were scarce and women now worked the fields;
Kitchener’s harvest turned the world topsy-turvy.

The sun seemed to be burning up the entire Earth
So hot it was on that day that I first met Esme.
She was naked as Eve as she came out of the water
I turned my head away in coltish embarrassment
But I was drawn to her skin swarthy with the sun
With droplets of water that sparkled as diamonds.

Unabashed, she beckoned me over with a smile
As she stood on the bank towelling herself down
Before tying her still-damp mane of gypsy curls
The blackest shade of many a starless night
With just a single strand of boatswain’s twine
Before donning a simple shift with floral pattern.

Esme was a water gypsy, busy working the canals
Two older brothers now having gone to France
Her family thus reliant on her for an income.
I was much dazzled by her worldly intelligence
That diminished the learning from my books;
Her uncommon poise, confidence and grace.

We would meet regularly after that first time
I would bring food filched from our kitchen
That she consumed hungrily with gratitude
And then taking home all of which remained.
I couldn’t imagine living from hand to mouth
But she made a virtue of this grim necessity.

Esme would often laugh so raucously at me
At the layers I removed to swim with her;
My whole naked body would flush furiously
But I was determined to show my courage
In throwing off the shackles of convention
To be as fancy free as I imagined her to be.

Oftentimes, we would just let our flesh bake
As we lay together on the roof of Celeste
The barge she used to transport the freight.
She would hold my hand, fingers entwined
And tell me all the many adventures she had;
I believed every word slipped from her lips.

My soft fair skin burned in that coarse sun
Esme treated it with home-made Camomile;
The creamy lotion and gentle hands soothed.
I still put the herb in my bed linen laundry
So that my sheets and pillowcases may sing
That plangent lullaby of a sweetest memory.

The world had changed on that sultry Summer;
Perhaps it was just me but everything felt odd.
I was now taller and I stood up to my Father
Telling him politely that I had my own ideas;
I would thus follow my own path with dignity
Blessed with the light of Esme’s wilder mind. 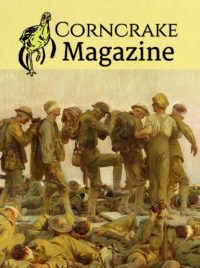